Media Release: The World Championship Scotch Pie Awards 2017 – the judges have their say 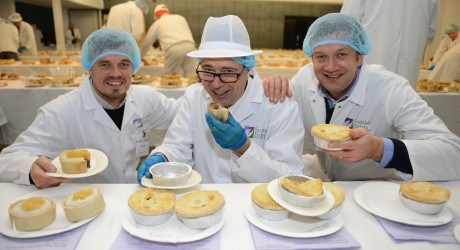 THE Rt Honourable Donald Wilson, Lord Provost of the City of Edinburgh, performed his ‘pie duties’ perfectly in Dunfermline today as he helped to assess the appearance, quality, consistency and taste of 500 of the best pies in the land supplied by 100 bakers and butchers as judging day commenced for the 18th World Championship Scotch Pie Awards.

“My father was a baker so I was excited to be here today and I have tasted some of the best pies on the planet. To know that one of them will ultimately be crowed the best Scotch Pie in the World? I am honoured to have had my say.”

And waiting in the wings was the first ever international entrant to the event. Kevin Haggard, owner of Sunblest Foods in Santa Maria, California, travelled all the way to Dunfermline to put his pies up against the best Scotland has to offer.

Kevin said: “I am so pleased to be here and to have the opportunity to see how my Scotch Pies and football pies measure up against the world’s best, this is a dream come true for me.

“I opened up my bakery Seattle in 1988 when I was 28 years old so it’s still a young business! Sunblest is a bakery that makes a line of traditional meat pies and I’m only one of a few bakers in the US that makes a Scottish meat pie.

“I saw an opportunity some years ago now to develop the market for superior meat pies and so I contacted the Pacific Northwest Scottish Society, and I provided pies for a Burns night dinner.

“This is how I was introduced to the Scottish community in Seattle and this allowed me to begin selling pies at the Highland Games.

“But to be here, in Scotland, meeting generations’ old bakery businesses, wow, I just hope my pies make the grade!”

This year also saw the introduction of celebrity judges to judge the football pie category.

Former Celtic player, Simon Donnelly, and Partick Thistle managing director and SPFL board member, Ian Maxwell, came together with professional judges to pick the best pies and savouries sold at a football match in Scotland.

David Beattie, chair, of Patrick Thistle was excited about this and said: “It’s important to remember that managers and players are customers too and this gives us the opportunity to celebrate the great pies that are served every week in grounds all across Scotland.”

Ian Nelson, head judge, said: “The macaroni pie is a unique Scottish product and we want to recognise this and have created a category all of its own. This means that butchers and bakers now have more chances to win in our vegetarian savoury products category.

“The World Championship Scotch Pie Awards is the only competition of its kind recognising excellence in the preparation of a perfect pie.

“The competition is now a regular fixture on the calendar as butchers and bakers throughout the land vie for pie supremacy and the boost to their business that always comes with such a sought after title.”

Thanks to the launch of a new website, www.worldchampionshipscotchpieawards.org, this years’ bumper crop of entries includes a wide range of ‘products at their peak’ with accolades on offer for the best:

The winner will be announced at a prestigious luncheon on 11th January 2017 at the Westerwood Hotel, Cumbernauld.

Scottish Bakers manages both the World Championships Scotch Pie Awards each year. The Scottish Baker of the Year Awards to recognise and celebrate excellence in the sector.