Media Release: The Big Gaelic Survey asks how media can help the Gaelic language to prosper 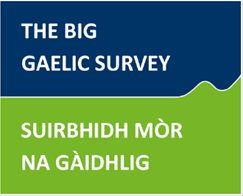 A NEW survey has been launched as part of research examining the impact of Gaelic media on learning of the language.

The Big Gaelic Survey, which has been commissioned by Bòrd na Gàidhlig and MG ALBA, is being conducted independently from the two organisations by Meriel Young Consulting, a research consultancy based in Edinburgh.

Three questionnaires have been launched aimed at those with varying levels of Gaelic proficiency: Gaelic speakers, Gaelic learners and those who are interested in learning Gaelic in the future.

Responses should take no more than five minutes to complete.

Among the topics raised in the questionnaire are the impact of platforms such as BBC ALBA and BBC Radio nan Gàidheal, the availability and quality of Gaelic learning materials and the gaps that may exist in resources to encourage more people to not only learn Gaelic but improve their aptitude in the language.

Meriel Young, from Meriel Young Consulting, said: “The research which has been commissioned by Bòrd na Gàidhlig and MG ALBA will help to inform the future of Gaelic media in forthcoming years.

“We want to reach a wide range of respondents, from fluent Gaelic speakers to those who would like to learn the language but have yet to do so. By reaching as many people as possible, male and female, young and old, we can enhance the value of our findings.”

“It is paramount for planning and developing the language that we understand how the media helps Gaelic speakers, learners, and those interested in learning access the language.

“This is the first time research such as this has been undertaken and it will enable us to measure just how important the media is in growing Gaelic.”

Iseabail Mactaggart, director of Strategy and Partnership at MG ALBA, said: “Our Lèirsinn 2021 strategy was launched last December with a five-year objective of transforming the contribution of Gaelic media to the revitalisation of the language.

“This new, independently-conducted research will enable us to understand the role media play in Gaelic language learning, from cradle to grave, and we are looking to hear opinions on what users feel they need to further develop their language skills.

“Digital media is evolving quickly and we must ensure that we support Gaelic language learning, capitalising on new opportunities as they become available.”

Bòrd na Gàidhlig is an executive non-departmental public body, responsible through Ministers to the Scottish Parliament.

Established under the Gaelic Language (Scotland) Act 2005 (The Act) Bòrd na Gàidhlig is the principal public body in Scotland responsible for promoting Gaelic development and providing advice to the Scottish Ministers on Gaelic issues.

Under the terms of the Act,  Bòrd na Gàidhlig is required to exercise its functions with a view to securing the status of Gaelic as an official language of Scotland commanding equal respect to the English language through: