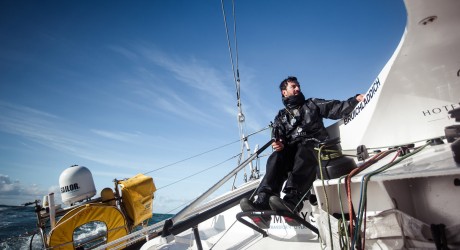 While most boat owners are putting their vessels to bed at this time of year, Phil – sailing his Class 40 ‘Imerys‘ – is to attempt one of the fastest of the record-breaking routes.

The ‘Cowes-Dinard’ was inaugurated in 1905 by King Edward VII, and has since taken place as an annual race. It is ratified by the World Sailing Speed Record Council.

Sharp – who is supported by Bruichladdich Distillery, on Islay – will be attempting to break the monohull category of the record outright.

His target will be to cover the 138-mile passage faster than 12 hours one minute and 31 seconds. This was set by offshore skipper, Jean Luc Van Den Heede (VDH), back in 2004, sailing ‘Adrien‘.

“This is a fast and exciting record that I have always wanted to take on,” says Sharp.

“It will be tricky to beat, as ‘Imerys’, at just 40 foot, is less than half the length of the current record holder.

“This means we will have to wait for some very strong winds from the north and ensure that the boat is pushed right to its limit throughout the crossing.

“Imerys will need to average at least 12 knots over the entire 138 mile route, and timing will be key for the attempt. There are extremely strong tides passing through the Alderney Race which can see currents of up to ten knots, so the departure time will be critical to try and make the most of the conditions.”

Jure comments: “At the moment, we are on standby in a Code Red situation until we see a clear weather opportunity for Phil’s attempt.

“There is a possible window that might open up towards the end of the week commencing 21st November, with some very strong NE winds.

“We will then have a much clearer idea on whether this looks possible.”

Phil has now delivered ‘Imerys‘ to Cowes where final preparations will be made.