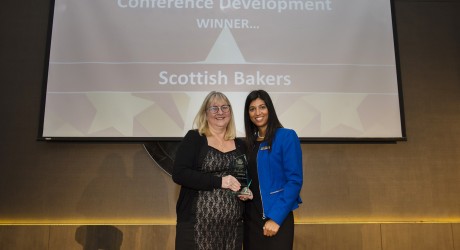 SCOTTISH Bakers, the association that supports and promotes the interests of Scottish Bakers across the country, has won a top award for the second year in a row at the UK Association Awards – for the Scottish Bakers Annual Conference and Awards 2016.

Scooping the prestigious conference development category, and bringing the prize home to Scotland, chief executive, Alan Clarke, was jubilant, stating: “This is an absolutely amazing achievement.

“A large part of our work at Scottish Bakers goes into recognising the excellence of our members through Scottish Baker of the Year and the World Championship Scotch Pie Awards, to name just two initiatives – but to have our own work recognised by our peers is simply incredible.

“The next time one of my members tells me that the prizes they are awarded mean everything to them, I will understand exactly how they feel.”

Scottish Bakers took the prize in the conference development category where the judges were looking for the development of superior content, design, marketing, sponsorship and delegate and sponsor experience.

The award recognises each of these areas taking into account increased value for stakeholders, association members and growth year on year of the conference.

The Scottish Bakers entry had this in abundance.

Continued Clarke: “We started five years ago with a very traditional conference and, over the last four years, have grown this into a must-attend event.

“Even the difference between our 2015 conference – which we were told by our members was world-class and we could never beat – was eclipsed in terms of attendance, quality and  member engagement by our 2016 conference.

“Our aim is to break-even and to seriously engage with our members and add value to their businesses.

“The winner of Scottish Baker of the Year has seen turnover increase by nine per cent, the winner of the craft baker of the award by 16 per cent and we have many examples of bakers increasing sales due to the publicity generated and each of them will stand on a stage and tell their story for us.

“There has also been a major journey for us in terms of stakeholder’s perceptions.

“We now have strong relationships at Government level and have raised the profile of our association and many of our members in Scotland. Our conference has been our ‘shop window’ to achieving this.

“We have also raised the expectations of our board and we now have a waiting list of owners and managing directors who want to come onto the board which is a reversal of our previous position.

“At the end of this year’s conference, we contacted all of our participants and sponsors to obtain feedback. As a direct result of this, 28 of our 36 exhibitors have committed to a three-year sponsorship deal and 100 per cent of delegates rated the event very good or excellent. We received more than 100 emails, cards and letters of congratulations. We had five TV performances, radio coverage and coverage in the major national and regional press across Scotland.”

According to the UK Association Network: “It is vital to recognise and reward talent. Associations Network’s Association Awards raises the profile of Association executives, globally, and gives them the recognition they deserve for their effort and success.

“We focus on the talent that associations consist of, both executive and voluntary.

“Associations have the ability to lead and develop all sectors and industries and the passion and dedication that associations and their employees put into their work is clear.

“This should be recognised widely. The Association Awards were established to recognise excellence in leadership, development and service in membership organisations.

“The initiative was developed by the Associations Network, which has been recognising and promoting excellence in associations since 2006, to its 15,000+ members.”