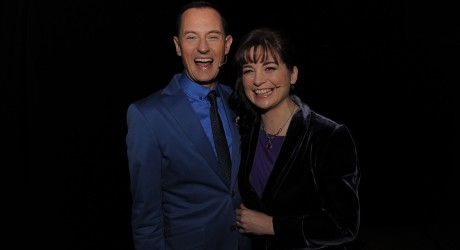 BBC ALBA is to once again provide live coverage of the highpoint of the traditional music calendar – the much-anticipated 2016 MG ALBA Scots Trad Music Awards.

Hosted by Mary Ann Kennedy and Tony Kearney, live from the Caird Hall in Dundee, this spectacular evening of music will acknowledge Scotland’s best traditional musicians for 2016.

Joining the party in Dundee will be BBC ALBA viewers across Scotland plus a global audience, with live worldwide streaming via the BBC ALBA website at www.bbc.co.uk/alba.

For radio listeners, live coverage of the event will also be available on BBC Radio Scotland from 9.00 until 11.00pm.

Now in its 14th year, the success of the Scots Trad Music Awards – and the contemporary folk music scene – is reflected in this year’s all-star musical bill which includes the Scott Wood Band, adopted Dundonian and double Mod medalist, Wilma Kennedy, The Halton Quartet and the sublime musical collective Songs of Separation, which comprises ten female folk musicians from Scotland and England.

This year, a champion of Scots language and culture will be awarded – Services to Scots – in recognition of unstinting work for the Scots tongue. Billy Kay, broadcaster and writer will be the first recipient of the award.

Another notable recipient of a special award is Dolina MacLennan, the Lewis-born singer, writer and actor who will receive the Services to Gaelic award. Dolina, who first made an impact in the nascent folk scene in Edinburgh in the early ’60s, was feted by the iconic Hamish Henderson, who recalled the young Dolina arriving in Edinburgh, ‘like a shepherdess trailing these songs of gold from ancient times’.

Following weeks of anticipation and a public vote, the evening will also celebrate those who have influenced the traditional music scene with a number of prominent nominees in this year’s Gaelic Singer of the Year category including veteran singer Calum Ross and relative newcomer, Ellen MacDonald.

Battling it out for Live Act of the Year will be festival favourites Skerryvore, Treacherous Orchestra and Mànran who join Elephant Sessions and Niteworks in demonstrating that traditional music is enjoyed and increasingly played by younger generations.

Margaret Cameron, BBC ALBA executive producer, said: “The MG ALBA Scots Trad Music Awards has been so highly valued by our audience since BBC ALBA began coverage back in 2008 and we are once again looking forward to a great evening of exceptional traditional music combined with the opportunity to honour our finest performers.

“Our coverage has been exceptionally popular with viewers in Scotland and we expect this year will be no different as the audience tunes in on line and on radio to sample Scottish Traditional Music at its very best.”

BBC ALBA’s coverage of the awards has also been supported by five-times Trad award winner, Julie Fowlis, who is currently presenting the acclaimed music series Port on the channel. Julie has recorded a special message for her followers on social media inviting them to tune into the awards.

Julie said: “The Scots Trad Music Awards has been hugely important over more than a decade in promoting the contemporary musical talent that Scotland produces.

“BBC ALBA has helped to bring traditional music to a whole new audience and it is fantastic that viewers can access such an event and soak up the performances and atmosphere of the awards.”

Na Trads / Scottish Traditional Music Awards 2016, produced for BBC ALBA by Bees Nees Media, will be broadcast live on Saturday 3 December starting at 9pm and will be repeated on Friday 9 December at 9.50pm.

Find out more about MG ALBA and the partnership at http://www.mgalba.com or visit www.bbcalba.co.uk for scheduling and programme information.