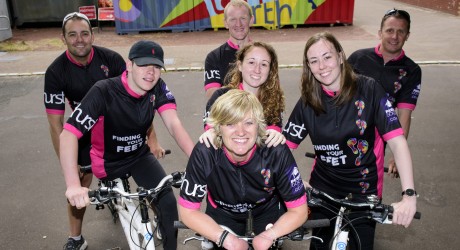 QUADRUPLE amputee, Corinne Hutton, founder of the charity, Finding Your Feet, is looking to round up a team of 92 cyclists to join her and gold-winning Paralympian, Jon-Allan Butterworth, to participate in the Spinney’s 92km cycle challenge in Dubai.

Almost 40 fundraisers have already signed up for the challenge, which is on December 16.

Commenting, Corinne Hutton says: “We would love to have a team of 92 cyclists join us in Dubai. We have an awe-inspiring team of amputees, as well as able-bodied supporters and fundraisers, including Emma Crichton, who we have lovingly named The Pedalling Podiatrist.

“Cycling 92km is a huge challenge for experienced and able-bodied cyclists so for those who have lost limbs to take on this event is phenomenal. I am confident the Prosthetic Pedallers will have a fantastic time taking part in the event and raising much needed funds.

“The money raised from this challenge will go towards funding more opportunities for amputees and those with limb differences all over the world. It will help people back on their feet and finance projects including amputee climbing, skiing, swimming, cycling, tennis as well as Scotland’s only amputee football team.”

If you are interested in joining The Prosthetic Pedallers, email Finding Your Feet on info@findingyourfeet.net or to donate, visit https://mydonate.bt.com/events/fyfdubai16/359250

Corinne Hutton established Finding your Feet following her own serious illness in 2013 which led to the amputation of her hands and feet.

During her illness, her family set up a fund to raise money for her to be fitted with bionic hands; however, Corinne promised that, once she was well enough, she would turn the fund into a charity to help other amputees.

Corinne defied the odds to make a remarkable recovery and within four months walked a mile through Glasgow on prosthetic legs to raise awareness of the charity.

Corinne devotes her life to Finding Your Feet, which has the backing of celebrities such as Gerard Butler and Andy Murray, and provides support to those with limb loss through sporting initiatives and social inclusion projects.

Corinne’s body was painted with organs that are deemed to be transplantable and her image beamed onto London landmarks including the Royal Opera House and Waterloo Station.

Jon-Allan lost his left arm in 2007 in an insurgent rocket attack when serving as a senior aircraft weapons technician with the Royal Air Force at Basra airbase in Iraq. He also served in Afghanistan in 2005.

The Dubai 92 is hailed as the cycle challenge for all; police escorts, road closures and through neighbourhoods with residents cheering 1,800 cyclists on.

Starting and finishing from the Dubai Autodrome, the route will take in the city’s most iconic architecture including the Burj Khalifa.

MEDIA RELEASE issued by Headline PR. You too can share your stories (aka press or media releases), on allmediascotland.com. Email here for more information.