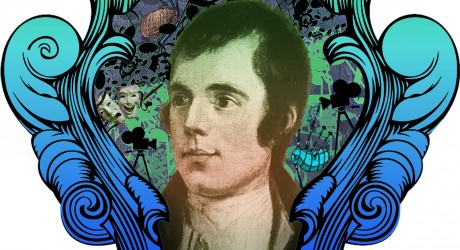 EDEN Court CREATIVE are excited to be hosting their fifth annual Burns night event, the Big Burns Stramash, this week as part of the Scotland’s Winter Festivals programme of events.

Honest men and bonnie lasses of all ages are invited to attend family workshops, film screenings and ceilidhs all held at Eden Court Theatre, Inverness, in celebration of Robert Burns.

The fun began on Saturday 14th January, with the first of two family-friendly lantern making workshops. Eden Court CREATIVE’s accessible arts worker and prop making expert, Haley Savage, facilitated the class for families to create unique lanterns for the upcoming Lantern Lit Procession, which will take place on Sunday 22nd January at 5pm. There will be a second workshop on Saturday 21st in the Jim Love Studio, 10am – 12.30pm.

The Ceilidh Commandos will be returning to play at the Big Burns Ceilidh on Saturday 21st January.

The trad super-group includes Murdo Cameron from Dàimh, Martin O’Neill of Treacherous Orchestra, as well as Gary Innes and Ewen Henderson from Mànran. The sangs and clatter will start at 8pm, wi’ plenty of Scotland’s finest beverages on offer at the Eden Court bar, and a bowl of stovies is included with the ticket.

Back by popular demand, two Wee Burns Ceilidhs will be happening: the first at 11am and the second at 3pm. This event is ideal for those with children under the age of eight, with big brothers and sisters welcome toofor lots of dancing, games and fun for all the family.

Premiere screenings of the Burns Stramash Up will be shown throughout the Sunday in Eden Court’s Cinema, showcasing the work of local school children.

Pupils from Daviot, Farr, Glenurquhart, Kirkhill and Lybster Primary schools have been working with the CREATIVE team to produce short films inspired by Burns’ poem, ‘My Heart’s in the Highlands’.

The festivities will end with a lantern-lit procession along the River Ness. The City of Inverness Youth Pipe Band will lead the crowd on a short route close to Eden Court to finish the celebration in true Scottish style.

Cabinet Secretary for Culture, Tourism and External Affairs, Fiona Hyslop, said: “Robert Burns is recognised and commemorated the world over, and has become such an important cultural figure over 200 years after his death.

“He continues to touch people’s lives with his prose, works and songs, and marking his birthday on 25 January is the perfect opportunity for us to come together as a nation to celebrate this and, moreover, our rich heritage, culture and creativity.

“It’s great to see the return of the Big Burns Stramash event celebrating Robert Burns and his enormous contribution to Scotland and the world in song and poetry.”

Lucy McGlennon, Eden Court CREATIVE’s business and engagement officer, said: “This is event is getting bigger and better every year and it’s great to see families returning to celebrate the life and work ofRabbie Burns with us.”

The Big Burns Stramash is supported through the Scotland’s Winter Festivals event fund, managed by EventScotland.