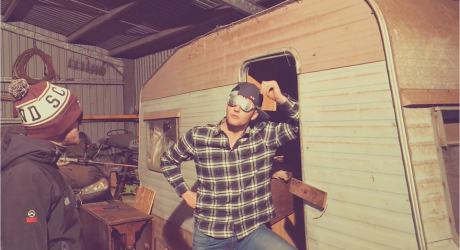 FILMG, the national Gaelic short film competition, has announced this year’s shortlists with stand-out entries by promising filmmakers, schools and community groups from all around Scotland making the hotly contested shortlists.

This year’s FilmG attracted more entries than ever before with many clever, fun and quirky interpretations of the theme ‘Strì’ (Endeavour/Conflict).

The FilmG jury panels comprised of industry professionals including producers, directors and scriptwriters from all over Scotland – as well as top sports commentators, given the inclusion of the new Sports Commentary Category this year.

One of this year’s panelists is BeesNees Media director, Duncan MacDonald, who said: “It is great to see so many filmmakers of all ages engage in this competition.

“This year we have seen a wide range of films and individual takes on the topic and those making the shortlist had a clear narrative and viewpoint. It’s not always about technical brilliance – heart and soul come through strongly in the best work.”

FilmG is MG ALBA’s Gaelic short film competition aimed at developing new on-screen and off-screen talent for BBC ALBA and new media and is open to anybody over 12 to make up to a five-minute short film in Gaelic.

The youth category received 56 film entries this year with a large geographic spread of schools from across Scotland making the shortlist including Lionacleit School in Benbecula, Plockton High School, Millburn Academy in Inverness, James Gillespie’s High School in Edinburgh and Calderglen High School in East Kilbride, among the finalists.

With such fierce competition, it is fantastic to see first-time FilmG entrants, Calderglen High School, making the shortlist for Best Film, with Eadar Dà Bheachd their humorous take on the theme, ‘Strì’ (Endeavour/Conflict), which sees the class fall out over their ideas for a film they’re working on.

Also in the running for Best Film is Gairloch High School’s emotional drama, Briste, about the devastating effects of illness on a family, which also caught the attention of the judges for Best Script award.

There were also some superb films shortlisted in the Open category, which includes entries by promising filmmakers over the age of seventeen, as well as community groups.

The shortlist for the Best Documentary includes the captivating A’ Tuiteam, by Jessie Ann MacDonald and Paul Steele from South Uist, with viewers given an insight into Jessie’s life coping with epilepsy.

Also, shortlisted for this award is Taobh Eile Duilghe  by up-and-coming filmmaker, Kerr Gibb from Portree, with his portrayal of the lives of 1.5 million Syrian refugees living in Lebanon. This film also earned him a place on the shortlist for Best Community Film.

With so many great entries, one of the hardest categories for the judges to whittle down was Best Comedy. Making it to the final four, however, was Girls, Strì and Macaroni, by Iain Wilson from Staffin, which follows the antics of rapper, Ally C, and his compadre, Calum Kan-y-e.

The TV Course students were not alone in making the cut, with Glasgow Kelvin College’s Gaelic learners getting a mention for their comedy, Leasan, in which a cruel Gaelic tutor teaches pupils insults when they think they’re learning the basics.

As with the Comedy award, many of the category shortlists have been very closely-contested including the new Best Sports Commentary.

The four shortlisted commentaries are evenly matched with two boys, Calum MacMillan and Jack MacDonald, who gave us their take on the Billy Macneil Cup Final, and two girls, Kate Bradley from Ardnamurchan and Christina MacDonald from Skye, making the final list. Kate Bradley chose to comment on the women’s shinty Valerie Fraser Cup Final, whilst Christina chose a favourite moment from the semi-final of the same tournament.

Top sports commentator and FilmG judge, Derek Murray, said: “It was an absolute joy and hugely encouraging to see so many aspiring commentators entering this competition.

“We had a plethora of engaging and informed commentary and those shortlisted would not look out of place on BBC Radio Nan Gàidheal or BBC ALBA. I would be privileged to work beside any of them and who knows, soon we may well get that opportunity.”

All of the shortlists are now available to view online at FilmG Youth and FilmG Open and you can also view all 105 entries in this year’s competition.

The winners will be announced at the prestigious FilmG awards ceremony taking place at the Old Fruitmarket in Glasgow on Friday 17th February. Keep an eye on FilmG Twitter and Facebook for information about tickets.