Media Release: The Broons raise a glass to the Bard 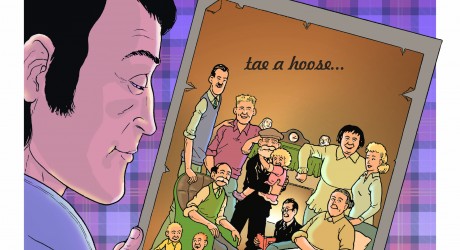 THE Sunday Post is celebrating Burns Night with a special ‘Broons Burns Supper’ pull-out this weekend.

In this Sunday’s paper, a 32-page supplement is dedicated to The Broons love of Scotland’s national Bard.

The Broons artists have illustrated some of their favourite Burns songs and poetry into Broons comic strips including ‘The Deil’s Awa Wi’ The Exciseman’, ‘A Man’s A Man for A’ That’ and ‘Addressing The Haggis’.

In the strip, Paw Broon takes starring role as Tam. Readers should look out for Maw Broon “Nursing her wrath to keep it warm” and even a brief appearance of Grandpaw Broon as “auld Nick” himself.

Editor, Richard Prest, said: “This is a fantastic product that celebrates Burns Night in our own unique way. Readers can enjoy a new interpretation of Burns classics in this beautifully presented special magazine from The Sunday Post.

“I’m sure the humour that runs throughout the comic strips would have been enjoyed by the Bard himself.”

The 32-page supplement, ‘Broons Burns Supper’, will be inserted with copies of The Sunday Post in Scotland and the North of England on Sunday 22nd January.

DC Thomson & Co Ltd is a private company and one of the leading publishing houses in the UK.  The company’s headquarters is in Dundee, Scotland, with a London base in Fleet Street.  DC Thomson publishes newspapers, magazines, comics and books.  The company also has interests in radio, printing, retailing and online services.

Scotland’s favourite family newspaper since 1914.  The title is on sale every Sunday across the circulation area of Scotland and the north of England.

Over the last few years, the paper has undergone significant change, with improved layout and better coverage of news and sport. The team of news reporters has received recognition at UK level for investigative journalism and The Raw Deal team take on our readers’ complaints, fighting on their behalf.

The family is made up of Paw and Maw Broon who are parents to eight children! Maw is the homemaker in charge of all household affairs. The Broons family features two older sons, Hen and Joe, and two grown-up daughters, Daphne and Maggie.

The younger children are Horace, who is the brains of the family, and the Twins (identical boys) plus the Bairn, a cut down version of Maw and wiser than her years. Last, but by no means least, is the roguish Granpaw Broon.

Granpaw and the Bairn form a formidable partnership that can usually outsmart the other members of the family.  The marvellous artwork and well observed storylines means that everyone recognises a little of themselves in these classic tales.

The strips often feature celebrity appearances and the famous faces that appear in The Broons see it as a great honour.

In 2016, The Broons celebrated the 80th anniversary of their first appearance in the Sunday Post.  The Broons family, Scotland’s happy family that makes every family happy, live at 10 Glebe Street in the fictional Scottish town of Auchentogle.

MEDIA RELEASE issued by DC Thomson. You too can share your stories (aka press or media releases), on allmediascotland.com. Email here for more information.