Media Release: NTS launch new engine room for Scottish theatre on the banks of the Forth and Clyde Canal, in Glasgow 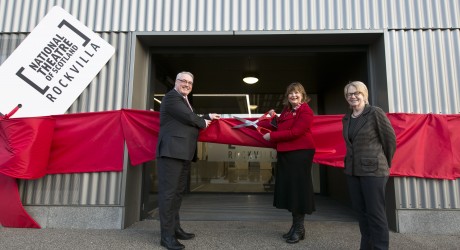 The National Theatre of Scotland launch Rockvilla – an engine room for Scottish theatre on the banks of the Forth and Clyde canal, in Glasgow, designed by Hoskins Architects

The National Theatre of Scotland has remodelled and extensively refurbished a former Cash and Carry building in the Speirs Wharf regeneration area of north-west Glasgow, to create Rockville.

This new centre for creativity, production and talent development, designed by Hoskins Architects, provides the company with approximately 3,700 sq. metres (40,000sq.ft) of space, over two levels.

The new National Theatre of Scotland facility enables the company, for the first time, to house all its rehearsal and production activity under one roof.

The company will remain a ‘theatre without walls’, committed to touring throughout Scotland and beyond.

The company moved into the building in November 2016 and already National Theatre of Scotland productions of Let The Right One In and The Strange Undoing of Prudencia Hart have rehearsed in Rockvilla before their respective openings at the McCullough Theatre for Texas Performing Arts in Austin, Texas, and The McKittrick Hotel in New York in January 2017 and December 2016.

Alongside these touring productions the building has also already accommodated a programme of talent development involving the National Theatre of Scotland Starter for 10 artists and provided space for industry events.

Rockvilla is designed by RIBA award-winning architects, Hoskins Architects, based in Glasgow.

They have an acclaimed portfolio of buildings designed for the arts and cultural sector including Mareel in Shetland, the UK’s most northerly cinema and music venue, The Bridge Arts Centre in Easterhouse and Culloden Battlefield Visitor Centre in Inverness.

The construction of Rockvilla was undertaken by Glasgow-based company, Luddon Construction.

“It will allow us to expand our offer to artists, practitioners, partners and communities and contribute significantly to a new and evolving cultural hub on the banks of the Forth and Clyde canal in north Glasgow.

“We are indebted to the vision and continued support of the Scottish Government, Glasgow City Council, and a host of trusts, foundations and individuals.

“Without their generosity, we would not have been able to make this project a reality. We are committed to making Rockvilla’s benefits to cultural life in Glasgow, and throughout Scotland, impactful and long lasting.

“The National Theatre of Scotland looks forward to this building delivering value locally, nationally and internationally and helping all Scotland’s theatre-makers to be stronger, braver and better in all in we do.”

Cabinet Secretary for Culture, External Affairs and Tourism, Fiona Hyslop, said: “Rockvilla will not only be a centre for creativity, production and talent development for the National Theatre of Scotland, it will be a hub of innovation for our wider Scottish theatre industry.

“This dedicated and inspiring space will enable this sector to continue to flourish and stand strong in their ambitions and I am delighted that the Scottish Government has been instrumental in helping the development.

“I look forward to enjoying the success of this new initiative across Scotland’s stages, and around the world.”

Councillor Frank McAveety, leader of Glasgow City Council, said: “I am delighted to see the opening of Rockvilla on the banks of the canal in Speirs Wharf.

“This fantastic building is not only the engine room for the National Theatre of Scotland and the wider theatre community, but is also the latest act in the growing number of cultural organisations locating in this part of the city, all playing a key role in its regeneration.

“I have no doubt that Rockvilla will help inspire more outstanding work for the National Theatre of Scotland, and we are delighted to have supported its creation.”

The National Theatre of Scotland is delighted to be part of an emerging cultural hub in this area of north Glasgow.

Other cultural tenants include Scottish Opera, the Royal Conservatoire of Scotland, Glasgow Sculpture Studios, The Glue Factory and the Whisky Bond.

Rockvilla has been supported by major financial contributions from the Scottish Government (£2 million), Glasgow City Council (£500,000) and the Vacant and Derelict Land Fund (£594,481).

The National Theatre of Scotland has also been successful in its fundraising campaign for Rockvilla, raising over £2 million to date towards the project’s overall costs from philanthropic sources including trusts and foundations, the popular Light a Beacon fundraising campaign and a major gift from Chris and Colin Weir.

The entire projects costs are £6.475million.

A new interactive, visually striking map, designed by Glasgow based design agency, Pidgin Perfect, is also unveiled on 23 January, demonstrating the contributions from individual donors who have lit up their chosen areas of the country with beacons.

This project will cost no more to operate annually than the company’s current facilities, whilst providing a greatly enhanced and fit-for-purpose building which will transform the way the National Theatre of Scotland works and supports the Scottish theatre sector at large.

About Rockville – the name and the area

The National Theatre of Scotland has recently announced its 2017 programme of work, with additional productions to be announced during the year.

Jackie Wylie will take up the post of artistic director at the end of March 2017. Lucy Mason is currently in post as interim chief executive.

Rockvilla architectural images are available from the National Theatre of Scotland’s press area , please contact Joe Blythe for a password.

MEDIA RELEASE issued by NTS. You too can share your stories (aka press or media releases), on allmediascotland.com. Email here for more information.