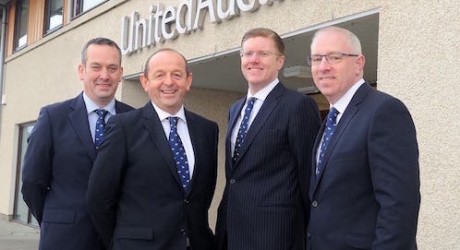 UNITED Auctions is pleased to announce a management buy-out of the company.

The deal includes all auction markets within the group, including the property holding at Stirling Agricultural Centre.

The seven-strong team assuming operational responsibility for the business was announced in August 2016 as part of the group’s succession planning programme.

Said George Purves, managing director of United Auctions: “This is a big step in the evolution and continued planned progression of the company and we are deeply proud to be sharing the responsibility of taking the business forward for the next generation.”

Former owners – Robin Tough, Neil McLean and David Leggat, who stood down from the management team in December 2016 – will each continue to have non-executive, advisory roles with the company.

Said outgoing executive chair, David Leggat: “We feel that this is the right time for us to take a step back and allow the next generation to take the business forward.

“We have the utmost faith and belied that the next team will continue to build upon the foundations and success the business has had to date.”

Legal and financial advice is being handled by Burness Paull and Johnston Carmichael, respectively. The buyout is being funded by HSBC Corporate, Scotland.

United Auctions (UA) is recognised as Scotland’s leading livestock auctioneers and procurement specialists and operates a network of different auction markets across Scotland, including Stirling, Huntly, Lairg, Dalmally, Tiree, Islay, South Uist and an area office and lairage facility at Oban. The company conducts auctions of both commercial and pedigree livestock, including the world-famous Stirling Bull Sales, and provides farm-to-farm and farm-to-abattoir procurement services. In 2013, UA was named in the London Stock Exchange’s ‘1000 Companies to Inspire Britain’.