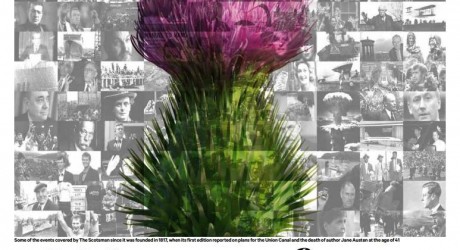 THE board of Johnston Press confirms that trading for the 52 weeks to 31 December 2016 (subject to audit) has been broadly in line with its expectations. Total revenues (after the benefit of the i newspaper) were down six per cent.

After a period of difficult trading in the summer – prompted by Brexit-related uncertainty – trading improved in Q4 as a result of both strategic initiatives implemented during H1 2016 and signs of improving business confidence.

Q4 total revenues were up one per cent compared to the equivalent quarter last year, driven by a strong performance from the i as well as other key titles such as The Yorkshire Post. This compares to a five per cent decline in Q3, in the immediate aftermath of the Brexit vote.

Total advertising revenue (excluding classifieds) fell seven per cent in Q3 compared to the equivalent quarter last year, improving to down three per cent in Q4.

Excluding the i, total advertising revenue (excluding classifieds) declined 9.7 per cent for the year, having declined 12 per cent in Q3, while improving to a seven per cent decline in Q4, while classifieds have also shown a marginal improvement in run rate in Q4.

As previously reported, the weakness of sterling post the Brexit vote has increased the cost of imported paper and ink.

However, management’s continued focus on costs has enabled it to maintain an adjusted EBITDA margin of some 22 per cent, believed to be amongst the highest in our industry.

Notwithstanding the headwinds faced, in line with our strategy, a number of areas are in growth.

In addition to our digital business, both Media Sales Centre transactional revenues (telesales) and contract printing were each up two per cent in 2016.

These categories make up over 50 per cent of our total revenue.

While the industry and the group face a difficult operating environment – especially in classifieds, including the structurally long-term challenged areas of property, motors and jobs – the board is pleased to note good progress across its four strategic priorities:

This year has started strongly with record web figures: 114 million page views, up 15 per cent year on year on January 2016, excluding disposals.

Monetisation of this traffic through XL enabled revenue to increase by ten per cent in Q4, year-on-year. Our news brands continue to see strong audience performance via social networks, led by a 60 per cent growth in followers on Facebook through 2016, to two million followers.

* Full copy sales of the i have increased its market share from 17 per cent on acquisition to some 20 per cent despite the 10p, 25 per cent cover price rise (Monday – Friday edition);

* The Scotsman has seen print sales gain momentum through the month, with an average growth of two per cent, year-on-year, helped by its 200th anniversary; and

* The Yorkshire Post and the News Letter (Northern Ireland) are both in single digit decline and have further improved their year on year run rates in January 2017.

Priority 2: Drive further success of the i newspaper

The i has increased its newspaper volume sales by five per cent (ABC excluding bulks), year-on-year, which, coupled with a 10p (25 per cent) week-day cover price rise, has seen Q4 circulation revenues up 20 per cent compared to the equivalent quarter last year.

The Saturday edition of the i has performed especially well, with circulation volume up 13 per cent, year-on-year.

These strong sales are attributed to a combination of the closure of the Independent newspaper, the investment in creating a dedicated i newspaper editorial team, strong and independent editorial leadership, and the reintroduction of the title into Northern Ireland.

Being part of the wider Johnston Press group has also brought a number of benefits: content sharing, improved distribution taking advantage of the group’s infrastructure, and the use of the weekly newspaper portfolio of regional brands to provide a low-cost approach to increasing public awareness of the i newspaper.

The group has also invested in the launch of a new website, inews.co.uk, which in its first nine months has gone from zero to achieving an average of 1.4 million unique users a month during Q4.

The number of advertising brands in the i increased to 103 during December 2016, the highest since acquisition. Brands including Porsche, Fedex and Debenhams have advertised with the i for the first time.

Since acquisition a number of inherited contracts have been renegotiated, reducing costs by over £1 million. Further cost reductions are expected as contracts come up for renewal.

Having acquired the i for £24 million (a 4.6x historic operating profit multiple) the group expects to see the full year benefits of circulation improvement, improved advertising trends since the transition period post acquisition, and cost reduction actions taken, to deliver continuing improvement in performance from the i in 2017.

Priority 3: Execute on an ever more efficient editorial and sales operation

The relentless cost cutting programme saved over £25 million during 2016, and now totals some £100 million since 2012, ensuring we maintained strong margins despite severe revenue pressures.

The cash from disposals reduces net debt, while also providing the business with liquidity, enabling the group to cancel its Revolving Credit Facility.

Ashley Highfield, chief executive officer, commented: “Despite the challenging print market, including a very difficult summer prompted by Brexit-related uncertainties, we have seen some improvement in our markets during the fourth quarter.

“Whilst we expect the overall market environment to remain challenging for both the group and the industry as a whole, we remain focused on delivering on our strategic priorities of growing our overall audience, driving the further success of the i newspaper, delivering a more efficient editorial and sales operation and strengthening the balance sheet.

“The market for quality news brands, that know their audience, in print and online – in a world of ‘fake news’, ‘alternative facts’, and internet ad fraud – is increasingly appreciated by our readers and advertisers alike.

“Our continued drive to maximise operational efficiencies gives us flexibility in the face of a challenging market and gives the management confidence that we can make further progress.”

Notes to the trading update

The figures are presented on a continuing adjusted basis including the acquisition of the i on 11 April 2016 and excluding disposals or closures of businesses and other non-trading or exceptional items.

Newspaper sales includes the i newspaper from 11 April 2016.

MEDIA RELEASE issued by Powerscourt. You too can share your stories (aka press or media releases), on allmediascotland.com. Email here for more information.