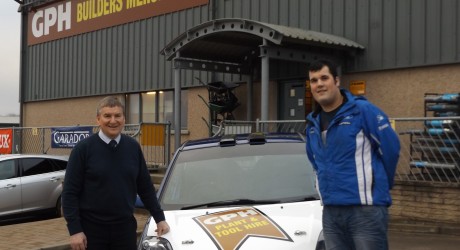 A NORTH-east rally driver is looking forward to showing off his new vehicle livery this weekend, thanks to sponsorship from a builders’ merchants.

GPH Builders Merchants, which has branches in Inverurie, Westhill and Stonehaven, has sponsored 23 year-old Scott Burness, to support his growing success in the Scottish Rally Championship.

The mechanic, who lives in Inverurie, is taking part in the Snowman Rally, in the first round of the AAR Craib MSA Scottish Rally Championship, which gets underway on Saturday 18th February in Inverness.

Having narrowly come second in class at last year’s event, Scott is hopeful of a good performance.

Scott, who has been racing since 2014, has rally driving in his blood as his grandfather, Jim Sutherland, 77, was a rally driver, with Scott’s mother as navigator.

Contesting the round in a Ford Fiesta ST, specifically built for rally driving, Scott will be supported by his girlfriend, Jodie Devine, who will be navigating during the event.

GPH chair, Mike Macaulay, said: “We are delighted to be supporting Scott. He is a local lad and a good customer of ours, so it has been great to see his success over the last couple of years. The Snowman Rally can be really challenging, so we wish Scott every success this weekend.”

Scott added: “I am extremely grateful to my sponsors who make this exciting hobby affordable. Rally driving can be expensive so I really appreciate the support. I recently had to change out a gearbox, which I couldn’t have done without the help I receive.

“I am looking forward to this weekend and the start of the Scottish Rally Championship, and I’m proud to be associated with GPH, so hope to reward their support in a good performance.”