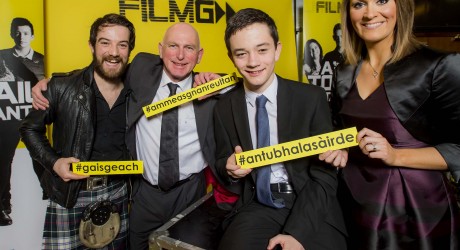 SCOTTISH stars turned out in Glasgow this weekend to present awards at the ninth annual national Gaelic film ceremony, FilmG.

FilmG is MG ALBA’s (the Gaelic Media Service) prestigious Gaelic screen talent awards, which this year attracted a record number of entries and was streamed live to audiences around the world.

The ceremony was held at The Old Fruitmarket, Glasgow and hosted by Fiona MacKenzie, face of BBC ALBA, and Niall Iain Macdonald, TV and radio presenter.

Live entertainment on the night was courtesy of four-piece band, INYAL, fresh from performances at Celtic Connections and The Highland Annual.

Guest presenters at the event included renowned Scottish actor, Gary Lewism who is currently gracing television screens in crime drama, The Level and has featured in Gangs of New York, Billy Elliot and Outlander.

Joining Gary on stage was Lewis MacDougall, the 14 year-old Edinburgh schoolboy and star of the new movie, A Monster Calls.

Actor, Kevin Guthrie, best known for his roles in Sunshine on Leith, Sunset Song and The Legend of Barney Thomson, was also in attendance, with BBC weather presenter, Kirsteen Macdonald, also presenting a number of awards.

John Swinney, Deputy First Minister and Cabinet Secretary for Education and Skills, with ministerial responsibility for Gaelic, was in attendance and presented the Best Film in the youth category.

Isle of Lewis born actress, Dolina MacLennan, known for her role in The Queen, Seachd: The Inaccessible Pinnacle and Barney Thomson was also on hand to present some FilmG awards, as well as Mairi MacLennan who stars in BBC ALBA’s drama, Bannan.

Gary Lewis, said: “It is an absolute pleasure to return to the prestigious FilmG awards and an honour to be in a room full of such talented youngsters. It’s imperative to encourage as many young and aspiring filmmakers as possible, and initiatives such as FilmG offer a fantastic opportunity for youngsters to be creative both in front of and behind camera and gain the confidence required to pursue a career in the Scottish creative sector.”

This year’s competition theme was ‘Strì/Endeavour’ which inspired an array of fun and engaging films and scripts by promising filmmakers, schools, and community groups from all over Scotland. In total 105 entries were submitted across the various categories.

The quality of film entries this year has been exceptional making it a very tough decision for judges to choose a winner in each category.

The stand out film in the youth category was Faigh WiFi produced by a group of children from the Gaelic Drama Summer School (An Sgoil Shamhraidh Dràma) which won Best Film. The film follows students at the summer camp on a mission to find WiFi.

Uilleam MacDhùghaill from Barra received the Best Performance award from young actor Lewis MacDougall for his role in Eilean an Dòchais, a drama set in Mingulay in 1907 dealing with the struggle for land.

Deputy First Minister and Cabinet Secretary for Education and Skills, John Swinney said: “It is clear that after nine extremely successful years that FilmG has a winning formula.

“FilmG not only attracts Gaelic and non-Gaelic speakers alike from across Scotland, it also provides opportunities for our young people to develop skills and develop their talents. I am delighted for all the award winners and nominees and I am proud that the Scottish Government continues to work with MG ALBA as a sponsor of these awards.”

Kirsty Scott and Class7 of Inverness Gaelic School took home the Best Drama and Best Community awards for their film, Latha Spòrs, which covers the most competitive day of the year – P7 Sports Day.

The competition allows entries to be made on mobile phones, highlighting the importance and quality of digital content that can be produced without the need for full production kit, particularly aimed at material for online platforms. Eòghan Stiùbhart, from Inverness, won this year’s Best Mobile Short for his entry, FilmG no Die Trying, which sees one man’s struggle to find his muse.

The award for Best Comedy went to Alannah Pheutan from the Isle of Skye for her entry, Gaidheal Gu Luath, which sets out to create a treatment to generate the perfect Gael. And the much-anticipated People’s Choice award also went to Alannah.

Donald Campbell, chief executive of MG ALBA, said: “This year’s FilmG has been bigger and better than any year yet and we have been truly impressed with the level of entries across every category.

“We’d like to extend our congratulations, not only to this year’s winners but to all who dedicated a lot of time and effort in creating a short film entry.

“The competition has evolved greatly since the inaugural award ceremony nine years ago, and we are delighted to see the level of engagement in digital media, in Gaelic.

“The new sports commentary category was also a welcome addition this year, allowing those behind camera with a passion for sport to get involved.

“The competition continues to attract new and aspiring Gaelic filmmakers, actors and scriptwriters to participate, and we are delighted that more and more young people are using Gaelic to tell their own stories using digital media.

“This is an exciting time and it is right that we are hearing and seeing more Gaelic voices and it’s important we build on this momentum.”

All 2017 winners are listed below, with every film entered in this year’s FilmG competition available to view online at www.filmg.co.uk.

FilmG is MG ALBA’s Gaelic short film competition, project managed by Cànan, the award-winning design, language and creative media company based at Sabhal Mòr Ostaig on the Isle of Skye.