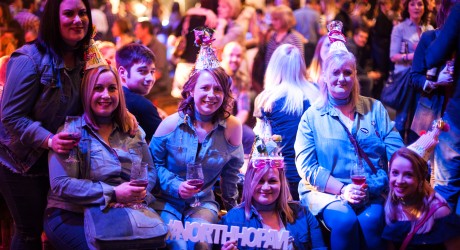 THE first ever edition of North Hop Aviemore has been declared a resounding success.

Over 1,000 people flocked to the Macdonald Aviemore Resort in the heart of the Cairngorms last weekend to take in two sessions of the roving artisan food and drink festival, which showcases the best food, drink and music which Scotland has to offer.

The venue’s Osprey Arena was transformed into a mix of barn dance meets cocktail lounge, with bales of straw and long tables set up in the centre in front of a stage and bars and stalls wrapped around the sides.

The theme of the festival was pares-ski, but the lack of snow out on the nearby Cairngorms didn’t dampen spirits at North Hop.

Festival founder and organiser, Michelle Russell, said: “We were absolutely delighted with the response to North Hop Aviemore. It’s always nerve-wracking staging a festival in a new venue but it all came together nicely.

“We spoke to people who had travelled from all over Scotland and the rest of the UK and beyond which proves that North Hop is becoming a real destination festival. We had a lot of groups of friends attending as part of a celebration; stag and hen parties and birthday get-togethers.

“Some tickets were available on the door but the evening session was declared a sell-out early on.

“The feedback from festival go-ers was that it was a great mix of food and drink from both local and Scotland-wide producers. The bars and street food stands were all buzzing!”

A new gin from local producer, Walter Micklethwait of Inshriach, was unveiled at the North Hop, with its purpose-built bar, complete with vintage horse-box, doing a brisk trade. The new Inshriach Gin, made with botanicals foraged around Inshriach, will be formally launched this coming weekend.

Tomatin Distillery’s whisky and tonic cocktails with a squeeze of lemon also wowed festival go-ers at their pop up cocktail bar hosted by Inverness bar specialists Bars R Us.

Cromdale-based Caorunn Gin showed gin-lovers that it was possible to mix up the traditional gin and tonic combination and explore new tastes, such as blackcurrant and a twist of lime with gin.

Caithness-based Dunnet Bay Distillers produced a festival gin made with Scottish cream, explaining to festival go-ers that the vapour produced made the finished product completely clear.

There was also a special one-off festival brew from Fife-based St Andrews Brewing Co and a special festival cider from Thistly Cross Cider in Dunbar.

Local hero, Spud the Piper, who has played for celebrities such as Madonna, was on hand to pipe the crowds into North Hop. He also played as part of a moving tribute to a popular member of the St Andrews Brewing Co team, Tom Holt, who was tragically killed in a car crash in Fife a week before North Hop.

Mr Holt, who was Australian, was due to be working at North Hop Aviemore with the St Andrews Brewing Co. At the close of both the afternoon and evening sessions, STV presenter and North Hop MC, Nicola McAlley, asked the crowds to raise a glass to his memory.

Photographs and videos were posted on social media for his family and friends in Scotland and Australia.

Following on from the success of last weekend’s festival, Ms Russell is now looking at staging another North Hop Aviemore in 2018.

The next edition of the festival will be held in in Aberdeen at the Aberdeen Exhibition and Conference Centre on the 14 and 15 April (Easter Weekend).

MEDIA RELEASE issued by Snow Marketing. You too can share your stories (aka press or media releases), on allmediascotland.com. Email here for more information.