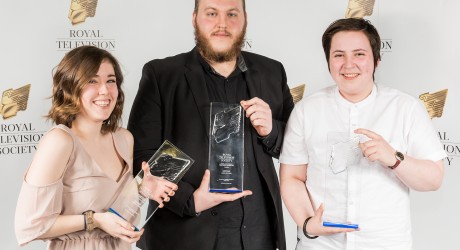 The event was hosted by Henry Eagles, who also chaired the judges.

The awards celebrate the best in student television from across Scotland and were presented this year in four categories: animation, comedy and entertainment, drama and factual.

The award in the animation category was presented to Ben Cresswell, Tuomas Kytöniemi, and Athos Tsiopani from Edinburgh College of Art (University of Edinburgh) for ‘Gnome’.

The jury admired the animation’s accomplished mix of stop motion and CGI. They felt the film was visually clear and said the music and sound was done well.

Eric Romero from Edinburgh Napier University received two awards on the night – excelling in both the comedy and entertainment and the drama categories.

His film, ‘Native Immigration’ won in the comedy and entertainment category, with the jury agreeing that this was a technically well done and well-presented piece with high production values and a great use of graphics.

In the drama category, Romero’s film, ‘Lethe’, was declared a “little gem” by the jury who felt it was a well shot, first-class production which delivered punch and worked on an emotional level.

The award in the factual category went to Jamie Sutherland, Kate Galbraith, Calum McIntosh, and Sean Hayman from University of Stirling for ‘The Cornerman’.

The jury was impressed by this well shot, professionally produced film. They felt the piece was enjoyable to watch with good access to interesting interviewees.

The University of Edinburgh