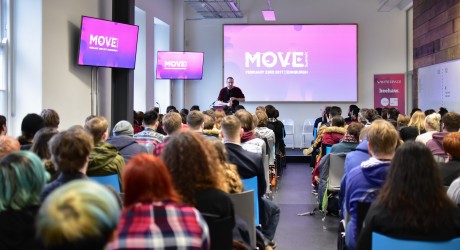 AFTER selling out in just over a fortnight, the first ever Move Summit, a celebration of Scotland’s commercial animation sector, took place in central Edinburgh last week, with participants calling the event “amazing”, “inspiring” and “energising”.

Despite battling with storm Doris, over 250 delegates flooded into Whitespace’s state-of-the-art office in central Edinburgh for a day split between emerging talent and industry professionals.

Students from all of Scotland’s colleges of art attended, as well as delegates from across the UK.

Move brought together the cream of Scotland’s animation sector.

Studios – including Axis Animation, Heehaw, Once Were Farmers and Interference Pattern – came together to offer presentations, workshops, recruitment advice and portfolio reviews to animation students from all of Scotland’s art colleages.

In addition, some of the UK’s most exciting companies – including 59 Productions (responsible for the astonishing ‘Deep Time’ opening ceremony at the 2016 Edinburgh International Festival), Red Knuckles, MPC (the BAFTA-award and Oscar award-winning studio behind The Jungle Book) and Disney Research Labs – took part in a packed schedule, which covered topics from virtual reality and intellectual property to live projection mapping (onto a jumbo jet) and why the visual effects on The Jungle Book took 30,000,000 hours to create.

Tom Bryant, the head of the Interference Pattern studio, which led the creation of the Move Summit, said: “The response to Move has been incredible. It’s been so much more than we could have hoped for.

“When we first had the idea for an event focusing on the commercial animation sector, we knew there was an appetite for it, but we never imagined such a strong and positive reaction.

“Everybody got involved. From the colleges and universities to companies at the cutting edge of the industry. The feedback has been fantastic and we’re now looking at how we take Move forward into the future.”

Doug Larmour, the global HoD Compositing at MPC said: “MPC was proud to be a part of this and we hope that Move Summit will grow to become a beacon of the Scottish VFX industry.”

Will Adams, the director and producer at Once Were Farmers, agreed: “The Move Summit was undoubtedly a success for both students and professionals alike and has made an vibrant contribution to the current buzz around animation and VFX in Scotland.”

Jill Wallace, head of personnel and facilities at Axis Animation, added: “Axis was delighted to be involved in the first Scottish animation festival event of its kind. Seeing the talent we have here in Scotland is really inspiring. Here’s to an even bigger festival next year.”

Hugh Hancock, Machinima pioneer and VR developer, summed up the industry response to the day: “The Move Summit was a big first for Edinburgh: an up-to-the-minute, lively, tech and art balanced animation event in the city. The start of great things, I suspect!”

Jayne Coulthard, Interference Pattern’s studio manager, said: “We have to thank so many people for helping make the first ever Move Summit a reality: Creative Scotland for funding the event; Axis Animation, Whitespace, Heehaw and Vision Events for sponsoring Move; and all of the speakers, panelists, hosts, chairs and exhibitors, as well as the volunteers who made sure the whole event went smoothly.

“It truly was a group effort and we couldn’t have done it without everyone getting involved. Thank you all so very much. We look forward to many more Move events in the near future.”

You can see photos from the 2017 Move Summit online here.

For more information on the Move Summit (and to find out what happens next) follow us online:

MEDIA RELEASE issued by Scottish Games Network. You too can share your stories (aka press or media releases), on allmediascotland.com. Email here for more information.