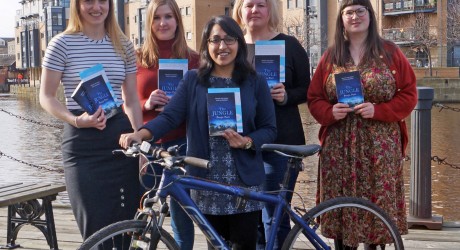 The book follows Mico, an unaccompanied child trying to make sense of his new life in the migrant encampment in Calais, commonly known as ‘the Jungle’.

With the launch of the book, author, Pooja, and the publisher are also keen to promote a London-based charity called The Bike Project.

Says Pooja: “Mico desperately wants to be part of the bike crew that fix up and sell bikes to fund their escape from the Jungle.

“The bikes aren’t just a form of transport; they offer a rare opportunity to take control in a life shrouded by uncertainty. The bike is in many ways a symbol of hope.

“This is why I am so proud to be supporting The Bike Project.

“Based in London, this charity takes second-hand bikes, fix them up and donate to refugees and asylum seekers. In doing so, they offer refugees a vital helping hand in getting their lives back on track.”

Adds Campbell Brown, managing director at Black & White: “The Bike Project is a small charity that has a big impact on the people they work with.

“In publishing the incredibly topical The Jungle, which ties in so perfectly with their important work, we have an opportunity to promote them in whatever way we can.

“We’re donating a bike or two, as is Pooja and her family, and we’re actively encouraging others to do so too.

“We’re including The Bike Project’s flyers in our mailouts and promotions, including a Books on the Underground drop.

“We’re also hoping to raise funds at the launch at Waterstones Tottenham Court Road on March the 18th, where The Bike Project will be present.”

The Bike Project – Getting Refugees Cycling

The Bike Project is a registered charity based in south London. Since launching in March 2013, they have provided over 2,000 bikes to refugees and asylum seekers.

It is estimated that at least 20,000 asylum seekers seek sanctuary in London each year whilst over 27,000 bikes are abandoned in the same period.

Just one of these bikes can help an asylum seeker access crucial services and appointments and save them £21.20 a week on a bus pass. When you’re living off of £36.95 asylum support, that can make a big difference.

In 2015, they also began to provide cycle training to female asylum seekers and refugees – as many of the women that the project sees are from societies where females were not encouraged to ride a bike, or where doing so was not considered ‘appropriate’.

Some of the bikes they receive are sold through The Bike Shop to generate funds, the proceeds of which ensure longer-term financial sustainability. You can also donate money directly to them or become a monthly sponsor.

MEDIA RELEASE issued by Black & White Publishing. You too can share your stories (aka press or media releases), on allmediascotland.com. Email here for more information.