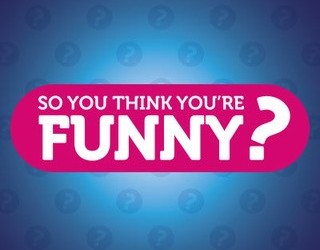 GILDED Balloon’s comedy newcomer competition, So You Think You’re Funny?, is back in 2017.

Celebrating the competition’s 30th year, it continues its status as one of the very best comedy newcomer competitions, with its “strong track record of showcasing the stand-up stars of the future.” [British Comedy Guide].

Applications are now open and close at the beginning of May. The competition producers make every effort to ensure every applicant’s live set is seen at regional showcases, applications are taken and booked on a first-come, first-served basis – so APPLY NOW or miss out!

To apply for this year’s competition, go to…

This year will be the 30th anniversary of the newcomer competition and will be celebrated alongside the Fringe’s 70th celebrations. As well as special celebration events planned throughout the Fringe in 2017, Gilded Balloon will also be launching a new, regular year-round presence for the competition.

With the success of the competition over the year’s, the Gilded Balloon are excited to launch a platform for those that have been through the competition as well as for complete newbies.

From Thursday, March 9th, the producers of newcomer comedy competition, So You Think You’re Funny?, will be launching a new comedy night at Leith Depot on Leith Walk.

For the first time in the competition’s history, there will be a new material night one Thursday of every month giving new comics a platform to practice and develop. The night will be an opportunity for past and future contestants to try out new material alongside more established comics. Each night will have open spots for new comics to trial new material with a familiar headliner to close the show.

Expect a few special guest surprises along the way as Gilded Balloon opens up the night to the huge roster of acts that have been part of the competition and their Fringe programme over the years.

Says Karen Koren: “Leith is the perfect place to host a night of new comedy each month. I love Leith and it’s an area with new events and venues popping up all the time. Moving our offices after 15 years from the top of Leith walk to the bottom seemed like the perfect opportunity to bring a little comedy to Leith too!”

The night will also be an absolute bargain of only a fiver for tickets, booked in advance online; otherwise, punters can come on the night and pay at the end of the show.

Applications are now open for Class Clowns – the comedy competition for the under-18s!

So You Think You’re Funny?’s younger sibling, Class Clowns, is recognised as the UK’s only comedy newcomer competition for under-18’s. Created by the producers of So You Think You’re Funny?, in association with Melbourne International Comedy Festival, Class Clowns gives a platform to aspiring young comics and performers to try their hand at stand-up!

Each year, Class Clowns hosts workshops in the run up to the final in August, with established comics helping to develop the applicant’s material and getting comfortable on stage. It’s a fantastic opportunity to get tips and advice from professional comics who get up on stage every day.

The Class Clowns final will be held at Gilded Balloon during 2017’s Edinburgh Festival Fringe and will be judged by a panel of industry professionals who have previously included Jo Brand, Zoe Lyons, and Kevin Day

The competition producers make all efforts to ensure that every applicant is given a place on at least one of the workshops but all workshops are booked on a first come first served basis – so APPLY NOW or risk missing out!

To apply for this year’s competition go to…

First in the series on Thursday 9th March will be hosted by Chris Forbes and Scott Gibson, headlining.