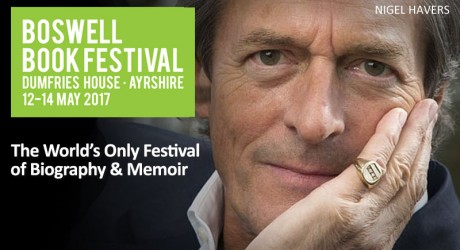 Glamour, the Gorbals and the Globe – life stories revealed

A rare chance to be in the company of charismatic Nigel Havers, star of stage and screen from Chariots of Fire to Coronation Street; and don’t miss Alex Norton, star of Taggart, on a life that’s taken him from the Gorbals to Hollywood; or hearing former director of the Globe Theatre, Dominic Dromgoole, on taking Hamlet to 190 countries.

Vogue editor-in-chief Alexandra Shulman – the magazine’s longest-serving editor – in conversation with Kirsty Wark; best-selling author, Simon Sebag Montefiore, on the history of the Romanovs; legendary editor of Private Eye and The Oldie, Richard Ingrams, on his hero, Ludovic Kennedy; ex-Cabinet minister and award-winning author, Alan Johnson, on his life’s trajectory from a London slum to the Palace of Westminster; winner of the Baillie Gifford Prize for non-fiction, Philippe Sands, author of the deeply-moving East West Street, on the origins of genocide and crimes against humanity. Plus Alexandra Mathie as Joan Eardley in the new promenade play on the artist, ‘who captured Scotland’s life and soul’.

Flora Shedden (20) runner-up of 2016 The Great British Bake Off talks about her first cookbook and Minoo Dinshaw (27) about the acclaimed life of historian, traveller, Hebridean laird, gossip and ghost hunter, Sir Steven Runciman.

Bella Bathurst, best-selling author of The Lighthouse Stevensons, explores deafness in her new book Sound and tells of her own hearing lost and found which takes us deep into the challenges of a soundless world that few can even begin to understand – until now that is – Publication: 4 May 2017.

100 years ago, the outbreak of the Russian Revolution led to the murder of the Romanovs one year later. Best-selling author, Simon Sebag Montefiore, tells the story of the dynasty.

Quote from festival director, Caroline Knox: “You don’t have to just love books to love this Festival. The range of life stories that populate the programme is incredible from actors, bakers, plant hunters, lovers and adventurers, to war heroes, judges, poets, painters, financiers and Tsars.

“And that’s not to mention our Children’s Festival, which has a thrilling programme of interactive events and appearances by leading children’s writers and illustrators.

“Thanks to our main sponsor, Creative Scotland, this is our biggest ever festival spread over six venues at beautiful Dumfries House including a newly-added marquee and the Great Stewart’s Dining Room.

“The rich choice on offer reflects our pride at being the world’s only festival of biography and memoir inspired by the father of modern biography and proud Ayrshireman, James Boswell.”

For those wanting time out with a pencil, The Royal Drawing School returns with their inspirational drawing classes for young and old alike.

This year’s Children’s Festival will be launched by bestselling author/illustrator, Nick Sherratt, creator of the funny ingenious classic, Shark in the Park, at 10am Saturday 13 May.

A riotous, buzzy weekend centered in and around the Engineering Centre on the Dumfries House Estate guarantees a unique weekend programme of entertaining talks and surprising outdoor activities to make families – and the planet – smile!

Nick is joined by authors, Nicola Davies, formerly presenter of BBC’s The Really Wild Show; much-loved Scottish writers, Vivian French and Debi Gliori; world circumnavigator, Jason Lewis; the award-winning duo, Mick Manning and Brita Granstrom; together with New Orleans’ based illustrator-in-residence, Harriet Burbeck, who will inject the ‘Yee-Haw’ into the Little House on the Prairie anniversary project. Waterstones Children’s Bookshop will be on site with a café nearby.

150 years ago, the worldwide best selling author of Little House on the Prairie, Laura Ingalls Wilder was born. As part of the Boswell Children’s Festival, illustrated panels will be on show created by pupils of Auchinleck, St Patrick’s Auchinleck and Ochiltree Primary Schools with much loved children’s writer Vivian French and New Orleans illustrator Harriet Burbeck.

Now in its seventh year, a festival weekend at Ayrshire’s Dumfries House inspired by Ayrshireman, James Boswell, considered the father of modern biography, with his ground-breaking Life of Dr Johnson, which has never been out of print since its publication in 1791.

More talks, more venues more variety this year – taking place over an increased six venues with a new festival marquee plus the addition of the Great Steward’s Dining Room.

Held at Dumfries House, the festival-goer can coffee house with leading authors; gossip with new friends in the café bookshop (Boswell would approve); ignite their drawing skills with The Royal Drawing School and enjoy tours of Dumfries House.

The festival creates the busiest weekend on the Dumfries House estate.

Established annual event for all the family

The Children’s Festival at the Engineering Centre makes an ideal outing for families, with talks and activities creating a bubble of fun.

Our sincere thanks are due to our main sponsor Creative Scotland for their invaluable support in helping us to expand, year on year.

“Boswell’s focus on biography, on a multitude of lives lived and experiences gained, has produced a festival that appeals to more than the traditional festival audience.

“Anyone can attend Boswell Book Festival, having never read the work of the authors appearing, and come away engaged, inspired and entertained. Their commitment to an inclusive children’s programme is also something to be celebrated.

“The annual Schools Day is free. The Children’s Festival Weekend author events charges only £1 for entry with some of Scotland’s leading children’s writers, including Vivian French, Nick Sharratt and Debi Gliori. There are also additional free activities for children.”

(Some events vary slightly in price, some are free)

Book signing: Authors will sign books immediately after their talk in either the venue itself or the Café/Bookshop.

Booksellers: Waterstones of Ayr will run the Festival Bookshop from the Café/Bookshop Marquee

The Boswell Trust: The Boswell Book Festival is an event inaugurated and staged by The Boswell Trust a charity registered in Scotland that is established for the promotion of heritage, literary arts and education, specifically the restoration of James Boswell’s mausoleum in Auchinleck churchyard and the creation of a visitor attraction in the adjoining Boswell aisle.