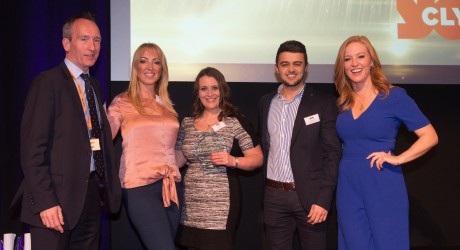 IT was double success for Radio Clyde at this year’s IRN Awards with Linda Sinclair named as ‘Reporter of the Year’ and Clyde 1s Superscoreboard taking home ‘Best Sports Coverage’.

The awards, in association with Sky News, celebrates commercial radio journalism and was held at the new Sky Cinema in the Sky Central building in west London last night (23 March).

Radio Clyde News chief reporter, Linda Sinclair, was crowned ‘Reporter of the Year’ in a hotly-contested category. She was described as a “fine all-round reporter with an authoritative but accessible style’ and someone who was ‘serious when necessary but not afraid to be light-hearted”.

Commenting on her award, Linda said: “Wow, just wow! I cannot believe I’m Reporter of the Year. I am so pleased to be recognised by the industry and in a category where the quality of journalism is so high. I want to thank the brilliant team at Radio Clyde, I couldn’t have done this without you.”

Meanwhile, the station’s reporting of the Scottish Cup final and its aftermath last May earned Radio Clyde the title of ‘Best Sports Coverage’. The judges said the team brought “brilliant journalistic rigour to a fast developing story’ and the coverage was ‘packed with pace and drama”.

Speaking on behalf of Clyde 1s Superscoreboard team – made up of Gerry McCulloch, Gordon Duncan and Alison Conroy – Gerry McCulloch said: “We are so thrilled with this result. The Heroes and Hooligans Scottish Cup Final story was a huge one for Scottish football and we are glad we were able to keep listeners up to speed with all the breaking news as it happened.

“I’m gutted I couldn’t be there with the rest of the team to collect the award but we have a vital Scotland World Cup qualifier against Slovenia this weekend, so the show must go on!”

Clyde 1 recorded its highest total hours since 2009 whilst Superscoreboard reported an increase in market-share.

Lorraine Herbison, head of News & Sport at Bauer Radio Scotland, said: “We are so proud of our brilliant team here at Radio Clyde. Huge congratulations go to both Linda Sinclair and the team at Superscoreboard for their incredible achievements at the IRN Awards. This illustrates the hard work and dedication they put in every day to ensure our listeners have the very latest news and sport as it happens.”

Pictured: Clyde 1 Superscoreboard team Gordon Duncan and Alison Conway are joined by Lorraine Herbison, head of News & Sport at Bauer Radio Scotland, to collect their award for ‘Best Sports Coverage’ at the IRN Awards 2017 for their coverage of ‘Scottish Cup final 2016: Heroes and Hooligans’.