Media Release: BBC ALBA portrays the reality of adjusting to life with a prosthetic leg 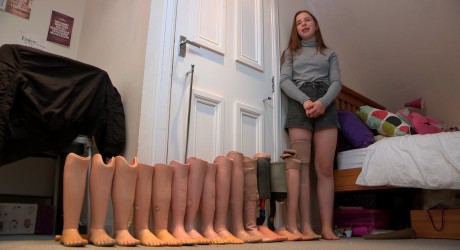 LEARNING to walk is one of the first things most of us do as an infant; however, some people have to learn to walk all over again.

A new documentary for BBC ALBA, ‘Ceum air Cheum / Step by Step’, examines the life-changing impact of losing a limb and having to adjust to life with a prosthetic leg.

In recent years, the media has portrayed amputees as superhuman – and many do go on to achieve feats which, until recently, would have seemed impossible.

For the vast majority, the reality is very different.

BBC ALBA was given access to the largest specialist centre for amputees in Scotland – WestMARC, West of Scotland Mobility and Rehabilitation Centre.

Begins a spokesperson: “Prosthetic legs don’t work out for all and, sadly, 60 per cent of WestMARC’s patients need to be in a wheelchair.

“This documentary follows the progress of four people, for whom prosthetic legs were successful, as well as seeing how cutting edge technology can transform the lives of those who can afford it.”

Fourteen year-old Iona Hay, from Glasgow, lost her leg after being diagnosed with cancer in her left leg at the age of just five, a year after sadly losing her mother to the same illness.

As she’s still growing, she gets a new leg every six months,

She says: “By the time I’m 20, I might have like 100 legs. I didn’t have much choice but I am really happy with the amputation.”

The first question Iona recalls asking was: “Will I be able to paint my toes again?”

Iona has several legs for different activities and sports, being a keen hockey player, dancer and gymnast.

Her dad, Steven, says: “Iona has adjusted pretty well, she’s a bubbly person, she didn’t have any particular worries about what was happening.

“She just loves dancing and it’s helped her be creative and express herself. She’s been able to get back to normal life.”

Her twin sister, Niamh, has watched her cope from the start of her illness, saying: “It’s just life, she does everything and I just forget that she’s got a prosthetic.”

Traumatic amputations are rare, but for adventure-loving 25 year-old, Andy Macleod, from Campbeltown, his leg amputation was the result of being knocked off his bike by a speeding car, in Fort William.

It wasn’t until a month after his accident that medics discovered Andy had also suffered a brain injury.

His mum noticed he had a problem with attention and concentration and didn’t understand humour and jokes like he did before, having always been full of fun and mischievous.

With a passion for extreme sports, Andy has been back in the saddle, off-road cycling.

He has now been fitted with a new state-of-the art bionic leg, only available privately at a cost of around £40,000, which he hopes will have a dramatic impact on his life and sporting ability.

He said: “My whole body will return to the way it was before, when I had two normal legs.”

The programme will also follow the story of bus mechanic, John Murphy (60), from Glasgow.

John developed diabetes at the age of 21 as a result of stress encountered whilst serving his country in the army. He was medically discharged and worked as a mechanic for the past 40 years.

John has just had his lower left leg amputated but is determined to walk as his prospects for going back to work depend on it.

He said: “Being in a wheelchair is not for me. I’ve got too many things I like doing. I want to get up onto my legs and start walking again.”

Having been fitted with his new prosthetic leg, John undertakes rehabilitation and physiotherapy to help him adjust and is encouraged after day one.

He continued: “I have plenty of hope that I’ll leave the crutches at one point, I’m chuffed to bits that I can do it, it’s just practice that’s what I need. I’ll be doing plenty of walking, not a marathon but plenty of walking.”

It is estimated that, in around 85 per cent of cases in Scotland, leg amputations are as a result of diabetes and poor circulation, which was the reason for Murdo Morrison’s amputation.

Getting a prosthetic leg at 78 has given Murdo, from Falkirk, a new lease of life.

Six months ago, Murdo thought he’d never walk. He had been having issues for the past ten years with his feet, losing his big toe as a result of diabetes and then, gradually, losing his toes, one-by-one on a yearly basis, before having his leg amputated below the knee.

Murdo remembers still feeling the pain in his toes a month or two after his operation, known as ‘phantom pains’.

Murdo said: “It’s strange, when you’re healthy you get up from a chair and walk to the other side of the room without thinking about it, but then it’s a new situation and I am getting up from a wheelchair and moving, you always have to be thinking what’s the next thing I’m going to do and if you don’t think that you’re going to fall.”

With advances in technology, what is it like nowadays for those adjusting to life after a leg amputation and learning to walk again?

‘Ceum air Cheum / Step by Step’, produced by Matchlight for BBC ALBA, will be shown on Thursday 6 April at 9pm.