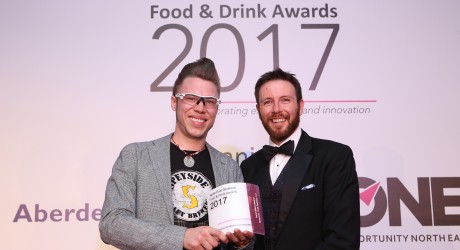 The brewery was one of 11 winners awarded at the ceremony on Thursday 30th March, which saw a total of 74 entries across all categories.

“We’ve been working with Glenfiddich for two years to perfect the recipe and process to create their IPA Experimental whisky,” he said.

“It’s great to be recognised for innovation, which is what the collaboration was all about.”

The young MD had just that day returned from Taiwan where Glenfiddich held the fourth of their global launches of their new whisky. Seb has been a key part of previous launches held in New York and countries within Europe.

The awards, delivered in partnership by Opportunity North East (ONE) and Aberdeenshire Council, are part of an ambitious programme of activity to support food and drink businesses of all sizes through business growth, innovation, strengthening the supply chain, market development and skills development.

Announcing the award, judges said: “The winning entrant not only thinks outside the box, but also has the ingenuity and inventiveness to make their ideas come to life.

“Our award winner is a relatively new business and demonstrated every aspect of successful innovation – a deep understanding of the chemistry of a traditional process, a commitment to research and trialing, an unique end product, and a very good collaboration with a long-established business, giving access to technology, people, logistics and worldwide markets.

“This collaboration with a well-known local distillery, referred to in their own words as ‘a meeting of the minds’, was a critical element for this year’s winner.

“Whilst producing a whisky-cask conditioned beer is not entirely new, tonight’s winner turned that process on its head by being the first to develop a beer-enhanced whisky, which was successfully launched by Glenfiddich in New York in late 2016.

“To meet demand, output at the breweryed have increased more than five-fold.”

MEDIA RELEASE issued by Speyside Craft Brewery. You too can share your stories (aka press or media releases), on this site. Email here for more information.