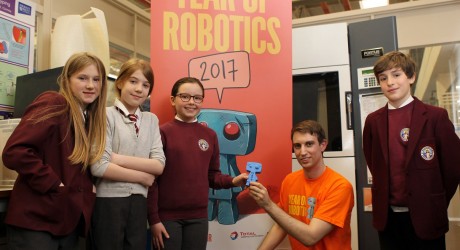 A TEN year-old schoolgirl has won a technology-inspired competition to design a mascot for Heriot-Watt University’s 2017 Year of Robotics.

She won the competition for school pupils which attracted an overwhelming 1,184 competitors from 41 schools across Edinburgh and the Lothians.

Katy’s design will now be used as the official mascot for the university’s Year of Robotics initiative and has been created using a 3D printer.

Katy said: “I could not believe it when they told me my ‘Watt Bot’ had won, I’m so excited. I tried to make it look quite funny by giving it different sized eyeballs and moving eyebrows. I think that’s why the judges probably liked it the most.”

Heriot-Watt University has been showcasing its contribution to the development of Robotics and Artificial Intelligence (AI) for future generations since January.

The university is running a calendar of events throughout the year spanning schools, the public, academia, industry collaborators, funders and policy makers.

Dr Theo Lim, from Heriot-Watt University, and Rossie Stone, from Dekko Comics, judged the mascot entries based on functionality, originality, imagination and effort.

Commenting on the competition, Dr Theo Lim said: “As well as being funny, Katy’s design is suited to 3D visualisation, modelling and printing, so we knew that it would look good once we printed it.

“Our aim for the competition was to inspire a fundamental interest in robotics and artificial intelligence in children from a young age – in a similar fashion to the way PCs were introduced to schools through the 1980s and 1990s.

“The impact that areas like machine learning and automation are going to have on the job market is going to be huge, so it’s important they have a good idea of what is ahead of them.”

Dr Ross Walker, who printed the mascot, said: “Technology has advanced very quickly when it comes to 3D printing, and we can now use materials from polymers to metals, from food products to cells, and the ability to mix various materials during the build process. It is an area in which a lot of progress has been made in a very short space of time.”

The Year of Robotics involves a consortium of partners spanning seven universities, research institutes, and private companies from Scotland, France, Switzerland, and Finland.

For all media enquiries, please contact Karen Grant or Jamie Barclay at The BIG Partnership on 0131 557 5252 or firstname.surname@bigpartnership.co.uk

Heriot-Watt is a specialist university, globally-minded and calibrated to the needs of society. A leading technological and business university, renowned for innovation in business, engineering, design and the physical, social and life sciences, Heriot-Watt defines its presence on the international stage in areas of world importance and value.

Our communities of scholars come from across the world and are leaders in ideas and solutions; delivering innovation and educational excellence, the university is ranked in the top ten for research impact in the UK.

With roots in Scotland and a truly international reach, Heriot-Watt is a leader in transnational education and a powerful driver and engine of the economy, transforming people and the world.

TEPUK is one of the largest operators on the UK Continental Shelf in terms of production and reserves with average daily production in 2016 of 158,000 barrels of oil equivalent per day.

Total’s production in the United Kingdom comes from several operated fields located offshore in three major zones: the Alwyn/Dunbar area in the Northern North Sea, the Elgin/Franklin area in the Central North Sea and the Laggan-Tormore hub in the West of Shetland area.