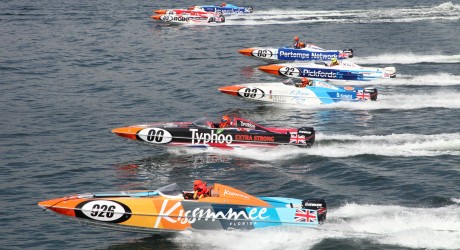 CINEMA audiences in Greenock and Dunoon will enjoy a special trailer over the coming weeks in the shape of a new promotional video for the 2017 Scottish Grand Prix of the Sea – in June.

The short clip – created by promoters, Powerboat P1 – will be played prior to each film at the Waterfront Cinema in Greenock and Studio Cinema in Dunoon over the next three months.

Featuring high-speed powerboat and jet ski racing action, the video will help increase awareness of P1’s thrilling event, which is returning to Greenock for a second year on Saturday June 24 and Sunday June 25.

Free for all to attend, the Scottish Grand Prix of the Sea is co-hosted by Inverclyde Council and Riverside Inverclyde and includes trade stands to showcase local tourism-related businesses.

Around 30,000 people attended the first ever Scottish leg of the P1 SuperStock UK Championship in Greenock last year.

Robert Wicks, Powerboat P1’s UK managing director, said: “After a brilliant debut in Inverclyde last year, everyone at P1 is counting down the days to the second Scottish Grand Prix of the Sea at Greenock’s Esplanade at the end of June.

“We’re delighted that, as part of an extensive local marketing campaign, we can add this innovative way to reach people in the region and make them aware of the exciting and free event which will be on their doorstep in little over two months’ time.

“Over the next couple of months we’ll be creating even more noise and colour about the second Scottish Grand Prix of the Sea before the biggest buzz of all, which is event weekend itself.”

The clip can be viewed here.