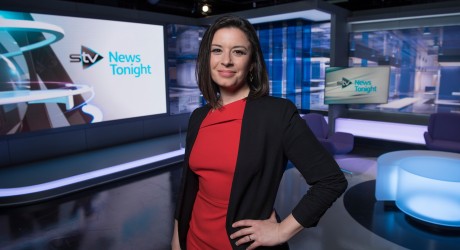 STV has confirmed that new channel, STV2, will launch on Monday 24 April with a distinct and exciting schedule, featuring a variety of new programmes for Scotland including an enhanced hourly news service, a live daily magazine show, an award-winning soap, features on local sport, the best of UK and international drama as well as classic movies.

Anchored by Halla Mohieddeen (pictured) live from Glasgow, the half-hour programme will air weeknights at 1900 on STV2 and offer a comprehensive news service featuring Scottish, UK and international news from a Scottish perspective.

The channel will also provide a weekly insight into political life in Scotland with Scottish Politics This Week, giving viewers the opportunity to catch up on the week’s debates from Westminster and Holyrood.

A range of quality acquisitions will form part of the new schedule, including one of Ireland’s most popular soaps, Fair City.

Viewers will also have the opportunity to watch much loved classic drama, Taggart, still one of the most popular crime dramas in Britain.

Popular weekday magazine show Live at Five will expand its reach on STV2 with outside broadcasts from across Scotland.

Weekly show E…presented by Laura Boyd and Gerry Cassidy will provide a guide to what is going on across Scotland with celebrity interviews, features and reviews of live music, TV and film.

And Ewen Cameron will host The Late Show, a tongue-in-cheek weekly chat show every Thursday on STV2.

The channel will also provide a home for many of the cultural events around Scotland, kicking off with an one-hour special from the Royal Conservatoire of Scotland in its first week.

Conservatoire Sessions will showcase the work of the academy’s keyboard department, with some of the school’s top students performing pieces by composers, including Rachmaninoff and Stravinsky.

The channel will create a platform for local sport as well as providing the latest from the football world each weeknight and weekends throughout the football season on Peter and Roughie’s Football Show.

The STV2 schedule will also include hourly news bulletins with stories from across Scotland in three dedicated half-hour news programmes: at 1300, 1800 and 2200.

Bobby Hain, director of channels at STV, said: “STV2 is the new channel for Scotland designed to reflect life across the country.

“The channel will provide a unique opportunity to broadcast content that isn’t available for viewers anywhere else, including in-depth coverage of local sport and live events and exciting acquisitions including soap and drama, alongside an enhanced news service with local, UK and international stories.”

STV2 will broadcast 24 hours-a-day, seven-days-a-week and will reach approximately 85 per cent of viewers in STV’s transmission area.

In addition to Freeview, access will be available online and via Sky and Virgin.

The service will also be available online via the STV Player.

STV Productions is one of the UK’s leading content businesses, with ambitious plans for domestic and international growth. The company has a record of success across a range of genres including drama, factual and entertainment, producing a wide range of programmes for a variety of networks, including entertainment show Catchphrase for ITV, ratings success Antiques Road Trip for BBC One, Safeword for ITV2 and documentaries such as Dunblane: Our Story  for BBC2 and The Queen Mary: Greatest Ocean Liner, a documentary for BBC Scotland, BBC Four and Smithsonian Channel.

STV’s digital business incorporates the popular website, stv.tv, and includes an enhanced digital news app serving consumers local, national and international news as well as features, sport and weather in one place.  The STV Player offers consumers within STV’s licence areas in Scotland the opportunity to enjoy programmes live or on catch-up.

STV holds L-DTPS licences for Ayr, Aberdeen, Dundee, Edinburgh and Glasgow.  STV’s existing city TV channels for Glasgow and Edinburgh will be rebranded and combined with three new licences for Aberdeen, Ayr and Dundee under one distinct brand, STV2. The channel will broadcast 24-hours-a-day, seven-days-a-week on Freeview channel 8, Sky channel 117, Virgin channel 159 and will be streamed online and available for catch-up via the STV Player.

The new STV2 channel will be a single programme service across Scotland that includes local material from all five licence areas in line with individual licence commitments.