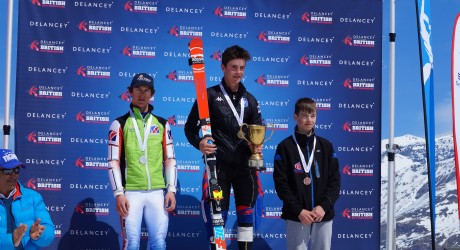 This is the fourth year he has won the Giant Slalom and Overall titles!

It means that Owen, from Glasgow Ski Racing – a dry ski slope in Bellahouston Park, Glasgow – can claim the top position in British children’s ski racing.

Owen’s brother, 18 year-old Zak Vinter, currently in the British U21 ski team, came third overall in the British Senior and U21 categories, which took place the week before, also in Tignes.

Said Owen: “I am delighted to have held on to the title, in this, my last year of children’s racing.

“I knew that many of the top English athletes where chasing hard this year and I had to push my limits once more.”

Exciting times ahead as Owen joins his brother, Zak, in senior ski racing.