Media release: Author, Ian Rankin, travels back to the start of the Deacon Blue story for BBC Radio Scotland 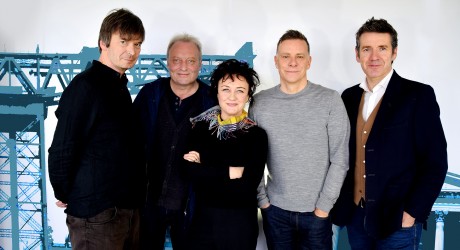 AUTHOR, Ian Rankin, remembers 1987 fondly – it was the year his well-loved creation, Detective Inspector John Rebus, first made his appearance in print.

At the same time, iconic Scottish band, Deacon Blue, also took their first steps to stardom with the launch of their debut album, Raintown.

Now the novelist will celebrate the 30th anniversary of the release of their landmark record and tell the story of how they became one of Scotland’s most popular groups in Deacon Blue: 30 Years of Raintown on BBC Radio Scotland on 1 May at 4pm.

The programme will also air on BBC Radio 2 on 8 May.

Ian Rankin said: “Thirty years since I wrote my first Inspector Rebus novel and 30 years since Deacon Blue leapt on to the world stage with Raintown… maybe there was just something in the Scottish water back then.

“Both have proved their resilience, with Raintown sounding as fresh as the day it was released. It was a joy for me to spend time with the band as they looked back on their achievement. It’s an album that belongs in everyone’s heart and collection.”

As well as new interviews with original members, Ricky, Lorraine, Dougie and Jim, there will be insight from the record’s producer, Jon Kelly. Legendary pedal steel guitar player, BJ Cole, remembers his solo on Chocolate Girl.

Hue and Cry, Gary Clark from Danny Wilson, and David Scott from Hearts and Minds/Pearlfishers are some of the other Scottish artists who were releasing music in the same year and share their thoughts.

Johnnie Walker and Mark Goodier remember being the first DJs to play Deacon Blue on the radio.

Record producer Trevor Horn, performer Aled Jones, and singer-songwriter Matthew Ryan, are all fans of Raintown and describe what the album means to them.