Media release: Gilded Balloon is expanding into the New Town! 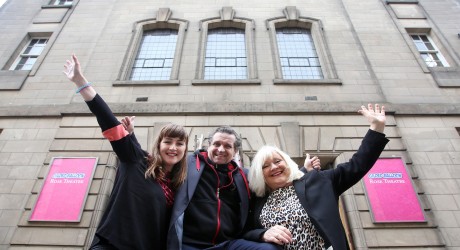 KAREN and Katy Koren are thrilled to announce that Gilded Balloon will expand into the heart of Edinburgh’s New Town, as they embark upon an exciting new partnership with the Rose Theatre.

This Fringe, Gilded Balloon at Rose Theatre will open its doors to present an eclectic programme of over 40 productions, from acclaimed musical theatre, through drama, comedy and cabaret, to Edinburgh’s very own panto kings and Scottish-American star of screen, stage, and radio – Craig Ferguson.

Says Karen Koren, artistic director of Gilded Balloon: “Gilded Balloon is looking forward to working with Peter Schaufuss and the extraordinary Rose Theatre during the 70th year of the Edinburgh Festival Fringe.

“We are all incredibly excited to be bringing the Fringe to the West End, expanding into a brand-new home that’s a stone’s throw away from the Book Festival. I first worked with Craig Ferguson in 1985, and I am so pleased that he is headlining our programme at the Rose Theatre. We can’t wait to welcome him – and his American audience! – to the 70th year of the Fringe.”

Returning to the Fringe for the first time in 24 years, cherished Scot, Craig Ferguson, will headline the inaugural Gilded Balloon at Rose Theatre programme with The Craig Ferguson Show.

Boasting celebrity guests, discussions on (and dissections of) current events, and your favourite acts from across the full festival, each edition of The Craig Ferguson Show will also be broadcast LIVE to the US on Sirius XM Satellite Radio.

Says Craig Ferguson: “I finally made enough money in America, so I can afford to work for Karen again. As long as it’s only two weeks and she lets me sell snacks at intermission.”

The Rose Theatre was founded by esteemed ballet dancer and director, Peter Schaufuss.

The full programme, including The Craig Ferguson Show, will go on sale May 11th 2017.

For tickets on sale today, please head to gildedballoon.co.uk/tickets

* The Rose Theatre is housed in the former site of the Charlotte Baptist Chapel and will open its doors to the public during the 2017 Edinburgh Festival Fringe, following a £1.8million conversion and refurbishment, presenting a programme in partnership with Gilded Balloon.

* Peter Schaufuss has been artistic director of English National Ballet, Deutsche Oper Ballet and the Royal Danish Ballet, as well as founding the Peter Schaufuss Ballet. He has been knighted in his native Denmark, and has won several awards for his work, including an Olivier Award and the Edinburgh Festival Critics Prize. Recently, he completed the purchase of Saint Stephen’s Church in Stockbridge, with similar plans to transform the space into a year-round dance and theatre venue.

* Craig Ferguson is renowned for his tenures on both The Drew Carey Show (1996-2004) and The Late Late Show with Craig Ferguson (2005-2014). He is the host of both Celebrity Name Game, for which he has won two Daytime Emmy Awards, and Join or Die with Craig Ferguson, and has extensive credits across film, television, stage, and radio. He has written two books, a novel, Between the Bridge and the River (2006), and a memoir, American on Purpose (2009). As of February 2017, he hosts The Craig Ferguson Show on Sirius XM, which will headline the programme at Gilded Balloon at Rose Theatre.