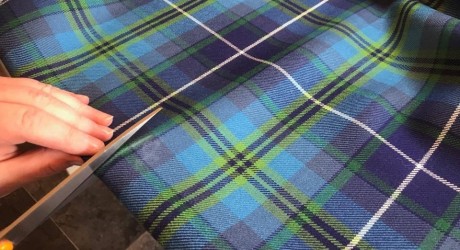 This officially-recognised World Fair Trade tartan has been registered by the Keeper of the Scottish Tartans Register in time for World Fair Trade Day and Fair Trade Fiesta events this May, as well as being part of their crowdfunding campaign.

This new, vibrant and unique World Fair Trade tartan is the brainchild of Tania Pramschufer, director of Hand Up Events and founder of Fair Trade Fiesta and Parade.

Working in collaboration with House of Edgar, textile designers behind the tartan, the well-known and distinctive Fair Trade colours of green and blue have been replicated in the woven design.

Part of the Fair Trade Fiesta crowdfunding campaign includes a kilt reward – for a pledge of £800 – for one keen supporter who will receive an exclusive, bespoke Fair Trade tartan kilt hand-made by Cathy Hope from Edinburgh-based artisans - Braw Kilts.

Commenting on the new Fair Trade tartan, Tania Pramschufer, director of Hand Up Events, said: “It is such an incredible honour to have been able to bring the World Fair Trade tartan and kilt project to fruition. This will create a lasting legacy for Scotland as a Fair Trade Nation whilst also supporting our WFTO members around the world.

“I am also extremely happy to announce the very first World Fair Trade tartan products will be made and designed by Anak at Villageworks in Cambodia supported by Scotland’s World Fair Trade Organisation member, Eve Broads, from Fair Trade Scotland.

“This is a truly wonderful circular project, with the first new tartan bags from Anak going on sale this summer and all proceeds shared between Villageworks and Fair Trade Scotland.”

Anak, director of Villageworks, said: “We are very excited to be part of this new venture, which will see the new World Fair Trade tartan, incorporated into their extensive range of bags and accessories from Cambodia.

“Our unique designs, combined with the skills of the artisans, make the new Fair Trade tartan products a must for the ethically conscious consumer, wanting to buy into a truly sustainable supply chain.”

Eve Broadis, Fair Trade Scotland, added: “We are so proud to be launching a range of World Fair Trade tartan accessories from our Cambodian partner, Villageworks.

“The tartan range, which carries the WFTO Guarantee System logo, will be unique to Scotland. As WFTO members both organisations encompass the ten WFTO Fair Trade Principles into their daily working practice, and the consumer can be confident that their purchase contributes to sustainable livelihoods for the artisans and their families.”

Minister for International Development and Europe, Alasdair Allan, said: “The Fair Trade Fiesta provides an excellent opportunity for the people of Scotland to come together to celebrate our continued commitment to Fair Trade, whilst also raising awareness of the need to further support Fairtrade producers and help people in developing countries.

“In having our status as a Fair Trade Nation renewed, Scotland has re-affirmed itself as a caring and outward looking nation, committed to further enhancing fairness in global trade and supporting those around the world who are most in need of our help.”

“It is a wonderful tartan for Scotland and we hope it will now go on to support all WFT members worldwide.

“The fact that we were approached to collaborate on this project because of our vigilant approach to ethical supply chain and raw material sourcing is of great pride to the company and we hope to be able to help promote the WFT ethos for years to come.”

Supporting the events Rudi Dalvai, president of the WFTO, said: “I am delighted to be coming to Scotland for World Trade Fair Day to wear a kilt made in the strong and deep colours of the new Fair Trade tartan.

“The Fairtrade movement was launched more than half a century ago by people with strong social responsibility towards the weaker in the supply chain of international trade.

“At that time, there was still a low level of public awareness about the exploitation of small farmers and workforces in developing countries producing products of our daily consumption.

“Despite this, Fair Trade has become a success story, although the exploitation continues in many parts of the world.

“Today, consumers have the possibility to choose products with the guarantee that they are socially and environmentally clean.

“And now Fair Trade has also become fashionable. There is no excuse anymore!!”

Fair Trade Fiesta will be hosted by presenter and Fair Trade ambassador, Gail Porter, over the course of the weekend performers and celebrities will be celebrating and highlighting Scotland as a Fair Trade Nation on World Fair Trade Day, involving people of all ages and backgrounds.

The aim of this event to raise more awareness on the Fair Trade movement through a vivid and vibrant parade and an engaging free concert with The Red Hot Chilli Pipers headlining and over 200 musicians and performers taking part to support this event, including: Cantara, Martin Aelred, Edinburgh Got Soul, Leanne & the Radix, Glasgow Gospel Choir, Pulse of the Place, Davidson Mains Pipe Band, One Tribe and Zuba.

Fair Trade Fiesta is being organised by Team Fair Trade Fiesta, a voluntary group and part of Edinburgh based Hand Up Events, one of the UK’s leading ethical events companies that exists to platform and promote fair and ethical trade to mainstream.

This project is using the Flexible funding open on Crowdfunder UK and will receive all pledges made.

Pledge £100 Be in the spotlight on stage with the Red Hot Chilli Pipers for a professional photo with 0405 Photography! Light refreshments included at the backstage VIP area.

Pledge £50 Professional photo shoot with the Red Hot Chilli Pipers with Ross Band Stand and or Edinburgh Castle in the background at Fair Trade Fiesta. Photos taken by 0405 Photography.

Pledge £40 Handmade artwork picture by DAWA designer, Audrey Coltart, with tartan at the background. Check her amazing work at: https://www.facebook.com/dawadesigns/

Pledge £20 Professional photo shoot with the famous and stunning Scottish piper Louise Marshall, who has played with Brian May, for The Pope and most recently performed at National TV Awards.

For more information about this event, becoming a sponsor or to make a donation, please email Tania@handupevents.co.uk