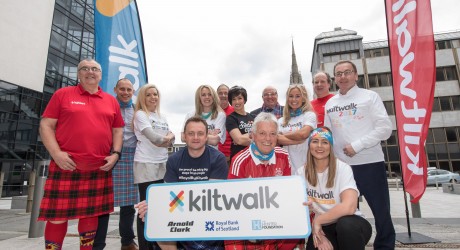 SOME of Aberdeen’s top business people took part in an one-mile warm-up to launch the second Royal Bank of Scotland Kiltwalk of the year, which takes place in the city and through the shire on June 4.

He urged individuals and businesses across Aberdeen city and shire to sign-up and get walking.

He said: “The Royal Bank of Scotland Kiltwalk is an inspiring event and there are so many worthwhile charities to choose to walk for. It’s the perfect way to raise money for charity, and have fun while doing it.

“I’m calling on the local community to get behind the Kiltwalk and sign-up.

“It’s great to see business leaders here today who have encouraged their employees and colleagues to take part. It’s a wonderful teambuilding activity and a chance to make a real, lasting difference.”

The ‘Big Stroll’ (15.5 miles) and ‘Wee Wander’ (eight miles) take place on the same day as the 26-mile ‘Mighty Stride’, so people of all ages and abilities can take part.

The Mighty Stride starts off in the city, leaving Duthie Park at 9am before heading out into the shire.

This year, even more people will be able to benefit as the Kiltwalk is now open to every Scottish charity.

For every pound raised by walkers, £1.10 will go to charity. This comes after Sir Tom Hunter and The Hunter Foundation generously pledged that 110 per cent of all fundraising at each of the four 2017 Royal Bank of Scotland Kiltwalk events will go to charity.

Whether a walker raises £10 or £100 or more The Hunter Foundation will add ten per cent to their fundraising total with absolutely no limit.

Paul Cooney, chief executive of the Kiltwalk, added: “We are so excited to bring the Kiltwalk back to Aberdeen once again. Our ambition is to turn the Royal Bank of Scotland Kiltwalk into Scotland’s largest mass participation event, so we’re asking Aberdonians of all ages to sign up and get involved.

“With the Aberdeen Kiltwalk just over six weeks away, now is the perfect time to start your training. There’s never been a better way to raise vital funds for any charity close to your heart.”

Kiltwalk has raised more than £3.5 million for Scottish charitable causes since 2011. The first Royal Bank of Scotland Kiltwalk 2017 took place in Glasgow on April 30, the remaining dates are: Aberdeen (June 4), Dundee (August 20) and Edinburgh (September 17).

This year’s fundraising will be further boosted by a pledge from Platinum sponsors, Arnold Clark, that one lucky Kiltwalker from each of the four 2017 events will win a brand new Renault Clio.

All you need to do is register for any 2017 Royal Bank of Scotland Kiltwalk and start fundraising to be in with the chance of winning the car.

Funds raised by those who choose to walk for the Kiltwalk itself will be distributed through the STV Children’s Appeal.

Meanwhile, Sir Tom Hunter and The Hunter Foundation have agreed to fund the new Kiltie Charity Boost programme, which will see the Kiltie Volunteer Network generate money for their chosen charities.

When Kilties sign-up, they will be asked which charity they would like to support and for every hour they volunteer Sir Tom Hunter will donate £1.10 to their charity.

To sign up for any of the four Royal Bank of Scotland Kiltwalks, visit www.thekiltwalk.co.uk

The BIG Partnership · Charity and the voluntary sector · Aberdeen, Dundee and North-east (postcodes AB and DD)