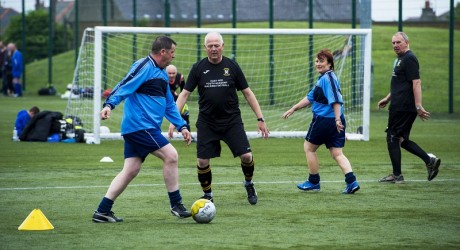 Ten teams from across Scotland will meet on a monthly basis over the next nine months to play walking football.

This slowed-down version of the ‘beautiful game’ for older adults has grown rapidly across Scotland by allowing people to reignite their passion for football, despite injury or illness, simply by slowing things down.

Billy Singh, walking football development officer, Paths for All, says: “Walking football has seen a massive growth over the last few years, with over 600 players taking part in games across Scotland on a weekly basis.

“We already have a national walking football festival and regional festivals so it made sense to pilot a national league.

“The benefits of playing walking football include improving physical and mental well-being, building new friendships and signposting to other activities in their local area.

“All players will be given pedometers to calculate how many steps are taken during games and to encourage players to build walking into their daily routine. I would encourage people to come along and support the teams and to find to out more about walking football.”

“Walking Football has proved a great success in North Lanarkshire and is a fantastic way to keep in shape, socialise and to play the game we love.”

Walking football ambassador, Davie Hay, says: “It’s great to see so many teams from all over Scotland competing in the national walking  football league. The growth of this version of the ‘beautiful game’ has been phenomenal and I am heartened by the fact that we have so many people still playing football in their later years.”

To find out more about walking football, and where your nearest club is visit www.pathsforall.org.uk/walkingfootball