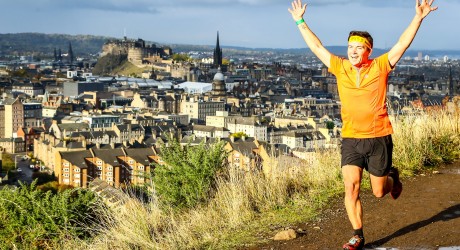 THE Ultra Tour of Edinburgh (UTE), a new 50km (approx. 31 miles) running tour of Scotland’s capital city, being staged on Sunday 22 October by Rat Race Adventure Sports, has been announced.

Jim Mee, who set up Rat Race Adventure Sports in Edinburgh in 2004 and has subsequently grown the firm into one of the UK’s largest operators of mass participation, wilderness adventure challenges, said: “We are looking for around 500 runners to take up the challenge of the inaugural ‘Ultra Tour’.

“This is a fully-waymarked journey through the city streets and outlying countryside that includes historic urban landscapes and evocative landmarks, parklands, hills, rivers, cycleways, foot paths, canals and coastal waters.

“It truly is a tour-de-force of Edinburgh sightseeing, all wrapped up into an achievable but challenging Ultra Run event format.”

Whilst being both challenging and completely engaging, running The Ultra Tour of Edinburgh will also give both visitors and residents an alternative and all encompassing impression of Edinburgh in just a few hours, the perfect urban adventure in just one day.

From a ‘Braveheart-style start’ down the Royal Mile, the mixed-terrain route takes runners through the streets and alleyways of the city centre, onto hills, up crags and past monuments, museums, seats of Royalty and Government; from the occasional sojourn totally off road to enjoy the hill top views of the Pentland Hills to the harbours of Leith.

From there, runners will head to the New Town and on to the finish at BT Murrayfield Stadium, home to Scottish Rugby.

The Ultra Tour of Edinburgh, an open participatory event, is an achievable step up from a marathon into ultra-running territory, as well as for those who are graduating from ten-mile, half marathon or multisport events.

However, being an Edinburgh event. the route includes 3,000 feet of tough ascent and descent.

The majority who have prepared well and put in the training miles should do very well, completing the course in the ten hours allowed.

Runners will also be well supported during the run. There will be three pit stops on the route offering a variety of sweets, food and drinks at each. Toilets will also be available. Kit bag return, showers and a hot meal will be available to all finishers, as well as a bar for that well-earned post event drink at the event’s finishline at BT Murrayfield Stadium.

They will be able to visit some of the key tourist sites and attractions on the route in between cheering their participating friends and family on their way. Organisers will look to provide guidance on travel times between the main spectator points and pit stop locations and how long runners are expected to take between each.

For The Ultra Tour of Edinburgh Rat Race Adventure Sports have partnered with Children with Cancer UK, the national children’s charity dedicated to the fight against childhood cancer – www.childrenwithcancer.org.uk.

Rat Race aim to raise £1 million for the charity over three years and are already over half way to that target.

Downloadable images of runners in Edinburgh and views of Edinburgh from the Ultra Tour of Edinburgh route got to: https://www.dropbox.com/sh/a72hhv22gi7ew0v/AACF_qoMytbN1WgD710FOazWa?dl=0

All runners looking to tame the challenge of The Ultra Tour of Edinburgh should head to the website for more information and to sign up: http://ratrace.com/ute

An overview of the route:

Rat Race Adventure Sports (http://ratrace.com/) is a successful Scottish registered company, now based in York, yet with roots still firmly set in the City of Edinburgh.

The company’s first ever event, The Edinburgh Rat Race, was staged in the city in 2004.

It brought adventure racing into an urban environment and gave spectators a fantastic and thrilling event to watch. The company went on to organise a Rat Race Urban Adventure Series of at least nine Rat Races in the UK and Ireland.

Rat Race Adventure Sports now offers one of the largest selections of mass participation, wilderness adventure challenges in Britain, together with a branded range of its own sporting apparel and online clothing and equipment store.

Their event programme has always been focused on Scotland – urban and wilderness playgrounds of the highest quality.

In 2017, Rat Race are bringing a traditionally wilderness discipline, the ultra run, into an urban environment and making it truly accessible to both runners and spectators.