Media release: Three in a row for Village Hotel Glasgow 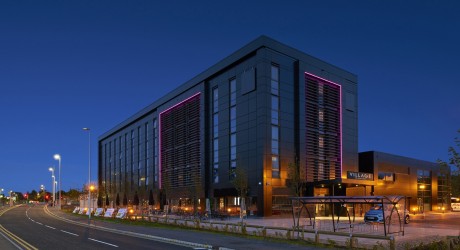 LESS than two years after opening, Village Hotel Glasgow has beaten off stiff competition to be crowned Scotland’s Brand Hotel of the Year at the 2017 Scottish Hotel Awards.

This is the Glasgow hotel’s third consecutive year of winning at the prestigious awards –  Jamie Stevens was named Manager of the Year in 2015 and the hotel scooped the title of City Hotel of the Year in 2016.

Opened in 2015 following a £21m investment, and with its distinctive ‘Black Box’ design, Village Hotel Glasgow is now a landmark feature in the ongoing Pacific Quay masterplan, which is revitalising the city’s former Garden Festival site.

Offering self check-in, 120 contemporary bedrooms all of which feature widescreen TVs, state-of-the-art Village Gym (used by Glasgow Warriors RFC), Starbucks and Verve Grill & The Public House, Village Hotel Glasgow has quickly established itself as one of Scotland’s leading hotels.

Jamie Stevens, senior general manager with Village Hotels Scotland, who is based in the award-winning Glasgow property, notes: “As a relative newcomer to the thriving Scottish hospitality scene, it is an absolute credit to the vision of our owners, and our hard-working 150 strong team in Glasgow, that Village Hotel Glasgow managed to beat off so many longer-established hotel brands to win such a hotly contested, national award.”

The Village Hotels brand was launched in 1995, and now operates 28 properties across the UK, including three in Scotland – Aberdeen opened in December 2014, with Edinburgh and Glasgow following respectively in January and July 2015.

The latest addition to Village Hotel chain is set to open later this year in Portsmouth.