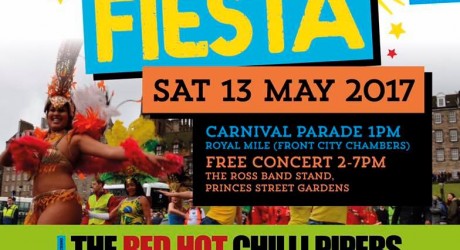 TUNING up for this year’s Fair Trade Fiesta Concert and Parade, over 200 performers will take part in a free, five-hour concert celebrating World Fair Trade Day this Saturday.

Starting the day with a colourful, fun and eclectic Parade leading down the Royal Mile and Mound to the Ross Band Stand, a great line-up of bands will be taking part including the Red Hot Chilli Pipers, Cantara, Edinburgh Got Soul, Leanne & the Radix, Glasgow Gospel Choir, Pulse of the Place, Davidson Mains Pipe Band, One Tribe and Zuba.

“We accomplished one of our dreams by performing in Las Vegas a few days ago and there have been so many highlights for us over the years. However, our relationship with Fair Trade Fiesta is one that we value and cherish right up there along with playing with Ed Sheeran and rocking Ewan McGregor’s private party.

“We tour the world and we often see for ourselves what a difference the Fair Trade movement makes.

“We are so proud of our Scottish heritage so it makes is even more delighted to know that Scotland is officially a Fair Trade nation.

“We intend to rock the Ross Bandstand to the core on Saturday and can’t wait to give our support to Tania and her team for this great cause.”

Piping legend, Lou Marshall, from Cantara, said: ”I am completely honoured to once again be performing on the catwalk at fashionAble as well as on stage playing World music with my band, Cantara, at the Edinburgh Fair Trade Fiesta.

“It will be extremely special for me, as I will be wearing the gorgeous World Fair Trade Tartan which is to be woven and made into beautiful ethical products by Fair Trade organisations around the world, which in turn is helping to support local global communities.

“As Piper to the Lord Provost of Edinburgh, I am also very much looking forward to piping the president of the World Fair Trade Organisation  and our International Minister to the start of the parade at the City Chambers.

“Let’s celebrate Scotland as a Fair Trade Nation together and have fun!”

Arriving at the Ross Band Stand, along with performers, pipe bands, samba bands concert-goers will be invited to create a human chain around the Ross Band Stand to mark World Fair Trade Day before leading onto a lively Scottish ceilidh vibe, African dance, Zumba, soul, music, and dance ensuring an enjoyable and engaging experience for all.

Hosted by TV presenter and Fair Trade ambassador, Gail Porter, celebrity and host, said: ”I am immensely proud of being part of the Fair Trade movement for many years. World Fair Trade day unites us with Fair Trade producers globally and I am thrilled to be part of the weekend’s events celebrating Scotland as a Fair Trade Nation in Edinburgh.”

Also attending the day’s events, the president of the World Fair Trade Organisation (WFTO), Rudi Dalvai, said: “I am delighted to be here in Scotland for World Trade Fair Day. ]

“The Fairtrade movement has been launched more than half a century ago by people with strong social responsibility towards the weaker in the supply chain of international trade.

“At that time, there was still a low level of public awareness about the exploitation of small farmers and workforces in developing countries producing products of our daily consumption.

“Despite this, Fair Trade has become a success story, although the exploitation continues in many parts of the world.

“Today, consumers have the possibility to choose products with the guarantee that they are socially and environmentally clean.  And now Fair Trade has also become fashionable. There is no excuse anymore!!”

Minister for International Development and Europe, Alasdair Allan, said: “I am delighted to be participating in the Fair Trade Fiesta, celebrating Scotland’s continued commitment to Fair Trade and our achievements as a Fair Trade Nation.

“In having our status as a Fair Trade Nation renewed, Scotland has reaffirmed itself as a caring and outward looking nation, committed to further enhancing fairness in global trade and supporting those around the world who are most in need of our help.”

Following on from the success of the 2014 Fair Trade Fiesta, director of Hand Up Events, Tania Pramschufer, commented: “Fair Trade Fiesta is a brilliant celebration for Scotland as a Fair Trade Nation, working with schools, local youth enterprises, charities, fair trade organisations an interfaith groups, at the last Fiesta we estimated 4,000 people attended the concert throughout the day and on the street to watch the Parade.

“It is a lively family event with music and dance from all over the world and this year the message is a human chain and how we are all connected.”

“In addition, we have our ‘fashionABLE‘ show tomorrow, promoting diversity and inclusivity on the catwalk, with fair trade, upcycled and Scottish collections, running at Waverley Station on Friday 12 May, on the eve of Fair Trade Fiesta.

“So, lots of great opportunity to really get involved during the weekend.”

Thanks to Scottish Government, ScotMid Stores and Edin-burghers for special sponsorship support for the days events.

There will also be Fair Trade information, food and drinks stalls.

Fair Trade Fiesta is being organised by Team Fair Trade Fiesta, a voluntary group and part of Edinburgh based Hand Up Events, one of the UK’s leading ethical events companies that exists to platform and promote fair and ethical trade to mainstream.

If you would like to join the Fair Trade Fiesta events team, please be in touch; we welcome new members.

The event is completely non-for profit and will be funded through sponsors, donations and profit from food and drinks at the event.

We welcome support from donations and sponsors

For more information about this event, becoming a sponsor or to make a donation, please email Tania@handupevents.co.uk/ M:  07914 254 334