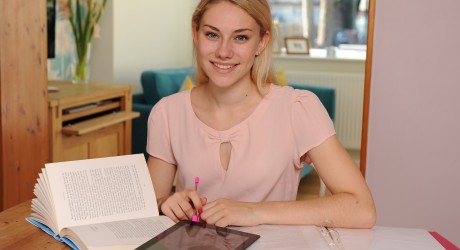 TODAY, Chivas Brothers began the search for bright, enthusiastic and dedicated applicants for its popular bursary scheme in partnership with the Scottish International Educational Trust (SIET).

The initiative, which launched to great acclaim for the first time last year, offers financial support to ambitious employees or their family members, helping them to realise their aspirations and take their talents to the next level, whether through further education or vocational training.

This sought-after bursary scheme sees Chivas Brothers team up with SIET, a body which provides talented men and women with grants to complete further education studies.

The partnership provides employees and direct family members with the opportunity to secure funding of up to £5,000 a year over three years.

Last year, the bursary, which is open to the 1,600 employees of Chivas Brothers, contributed towards the studies of an aeronautical engineer, a budding actress and a Classics student studying at Cambridge University.

Employees throughout the country at 32 sites in Orkney, Speyside, Central Scotland, Ayrshire, London and Plymouth are now being encouraged to apply and further their personal and professional goals.

Mia Forbes, one of the three recipients of last year’s bursary, said: “The bursary has been invaluable, it has relieved the stress surrounding my financial situation at university and allowed me to be more focused on my education.

“People underestimate the cost of books and other resources, but without the bursary it would have been a struggle. Chivas Brothers helped me to pursue my dream degree, easing the pressure of financial costs, something I will always be thankful for.”

Adam Donnelly, who is studying to become an engineer in aeronautics, said: “It’s safe to say, I don’t know what I would have done without the bursary. It enabled me to travel to college, something which was a high expense in my plans for further education.

“For anyone wanting to further their learning, I cannot urge you enough to apply, it’s an invaluable opportunity and the business’s support just eases that pressure of the financial demands.”

Jennie Norrish, global communications director at Chivas Brothers, said: “When we launched the Chivas Brothers Bursary last year, we were overwhelmed by the response and the high calibre of those who applied for it.

“Last year’s recipients have really benefited from the funding provided and we can’t wait to see the aspirations of this year’s applicants. An entrepreneurial mind-set is something that we champion at Chivas Brothers and so to be able to support that with not only our employees but their families too, is something we are truly proud of as a business.”

Michael Ewart, director of SIET, said: “This bursary is such a worthwhile initiative and we are delighted to be working with Chivas Brothers again this year. The scheme shows the business’s dedication and commitment to its employees, opening up opportunities for them that might never have been possible otherwise.”

To apply, employees can visit the company’s digital hub for its staff where an application form will be available. Applicants will be required to showcase why they should be selected via three sections on personal details, education and work experience.

Here, there will also be a variety of information about the beneficiaries from 2016.

Chivas Brothers is the Scotch whisky and premium gin business of Pernod Ricard, the world’s n°2 in wines and spirits.

The range is completed by a collection of blended Scotch whiskies operating in many of the world’s key whisky markets which includes 100 Pipers, Clan Campbell, Something Special and Passport Scotch.

Pernod Ricard is the world’s n°2 in wines and spirits with consolidated Sales of € 8,558 million in 2014/15. Created in 1975 by the merger of Ricard and Pernod, the Group has undergone sustained development, based on both organic growth and acquisitions: Seagram (2001), Allied Domecq (2005) and Vin&Sprit (2008). Pernod Ricard holds one of the most prestigious brand portfolios in the sector: Absolut Vodka, Ricard pastis, Ballantine’s, Chivas Regal, Royal Salute and The Glenlivet Scotch whiskies, Jameson Irish whiskey, Martell cognac, Havana Club rum, Beefeater gin, Kahlúa and Malibu liqueurs, Mumm and Perrier- Jouët champagnes, as well Jacob’s Creek, Brancott Estate, Campo Viejo, Graffigna and Kenwood wines.

Pernod Ricard employs a workforce of approximately 18,000 people and operates through a decentralised organisation, with six ‘brand companies’ and 85 ‘market companies’ established in each key market.

Pernod Ricard is strongly committed to a sustainable development policy and encourages responsible consumption. Pernod Ricard’s strategy and ambition are based on three key values that guide its expansion: entrepreneurial spirit, mutual trust and a strong sense of ethics.

About the Scottish International Education Trust

The Scottish International Education Trust (SIET) was set up by Sir Sean Connery and Sir Jackie Stewart in 1971.

Sir Sean donated his $1m fee for the film, ‘Diamonds are Forever’ – at the time the largest fee ever commanded by an actor for a single film.

Both Sir Sean and Sir Jackie are Patrons of the Trusts and take an active interest in the Trust’s work. SIET’s principal aim is to give awards to mainly young Scots who have shown particular promise and who need help to take their education or professional training further – usually at post-graduate or equivalent level.

MEDIA RELEASE issued by Pernod Ricard. You too can share your stories (aka press or media releases), on this site. Email here for more information.