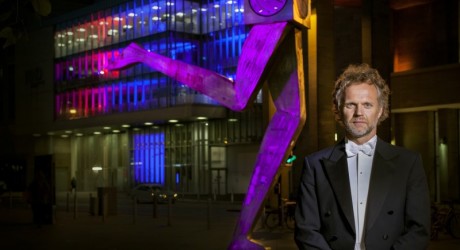 Thomas Søndergård is the latest appointment to the top conducting position of Scotland’s national orchestra, and follows such luminaries as founding conductor of Amsterdam’s Royal Concertgebouw Orchestra, Willem Kes; Hallé Orchestra and New York Philharmonic legend, Sir John Barbirolli; Georg Szell – credited with driving the Cleveland Orchestra to be one of ‘Big Five’ orchestras in the USA; Motherwell-born Sir Alexander Gibson, the Scottish orchestra’s longest-serving music director; and Neeme Järvi, one of the most prolific recording artists in the history of orchestral music and who has made over 70 recordings with the RSNO alone.

Søndergård first appeared with the RSNO in November 2009 as a last-minute replacement for an indisposed Yakov Kreizberg and went on to deliver critically-acclaimed performances of Shostakovich’s Symphony No11 in Edinburgh and Glasgow.

One music critic remarked of his first performance at the Usher Hall, Edinburgh: “The physical energy that the Danish conductor, Thomas Søndergård, put into the performance of Shostakovich’s Symphony No 11 was staggering.”

Søndergård was appointed to the position of principal guest conductor in 2011 and since then has appeared with the RSNO up to four times each season.

The new music director designate is initially contracted with the RSNO until 2021.

Søndergård will remain as principal conductor of the BBC National Orchestra of Wales until the end of its 2017:18 Season and will continue to have a close relationship with the orchestra.

Peter Oundjian steps down as music director at the end of the 2017:18 Season but will continue to be a part of the RSNO family, returning to Scotland for season concerts as well as leading the orchestra on its next European tour.

Said RSNO music director designate, Thomas Søndergård: “From the moment I was invited to stand in at the last moment to conduct Shostakovich’s Symphony No 11, nearly seven years ago, I felt something important was going to happen.

“With so little time to prepare I felt we would have a lot of work to do, and yet – once we began rehearsing – our working relationship clicked in such a way that, by the time of the performances, my first in Scotland, I think that together we were able to come close to the heart of this great music.

“Since then, we have grown together, explored a broad range of repertoire, gradually pushing the boundaries of what is possible, and our connection is as strong as ever. It’s wonderful to have reached this point and I look forward to the future musical journeys to come in my tenure as music director.

“I must thank Peter Oundjian for his tireless support and his invaluable contribution. This is an ensemble in great shape with an insatiable appetite for music-making. I’m delighted that Peter has agreed to continue his work with the RSNO after 2017:18.

“Scotland has a strong musical heritage and I feel privileged to play an increasingly involved role in the future of its national orchestra.”

Said RSNO music director, Peter Oundjian: “I’ve enjoyed a tremendously fruitful time with the RSNO. The orchestra’s passion for music-making is a thrill to be a part of.

“To welcome Thomas as my successor is both heart-warming and comforting, knowing that the musicians I’ve known for the past 15 years will be in the most capable of hands. It promises to be a tremendously exciting future for Thomas and the RSNO and I wish them every success.”

Added RSNO chief executive, Dr Krishna Thiagarajan: “In this business, it is reasonably normal for the courtship of potential music directors to be relatively brief, a handful of dates before the decision is made.

“In this instance the musicians have had eight years’ experience of working with Thomas Søndergård, five of which as principal guest conductor.

“That the orchestra was virtually unanimous in its decision to appoint Thomas to succeed Peter speaks volumes about the strength of the relationship and the mutual respect they share. We hit the ground running with this appointment and over the next few years our supporters will witness their orchestra striving for new heights in performance and recording excellence.

“I’d like to take this opportunity to thank Peter Oundjian for his outstanding tenure as music director, which has brought about a period of extraordinary concerts, tours and recordings. I’m delighted that Peter has agreed to continue his relationship with the RSNO as he is a superb musician who is much loved by musicians and audiences in Scotland and across the globe.”

“I am fully confident his extensive experience working with orchestras around the world will hugely benefit Scotland’s classical music-making scene and our communities, and I am personally looking forward to welcoming his first season in post.

“Thomas continues the outstanding work of his predecessor, Peter Oundjian, whom I commend for his excellent tenure as music director, for his successful tours in the USA, Spain and China and for steering the RSNO through its 125th anniversary. I expect the orchestra to continue to thrive and grow under Thomas’ guidance.”

Thomas Søndergård’s first RSNO programme as music director designate features Mahler’s Rückert-Lieder – with soloist, Jennifer Johnston – Beethoven’s Leonore Overture No3 and Sibelius’ Canzonetta, Kuolema: Kurkikohtaus (Scene with Cranes) and Symphony No5, at the Usher Hall, Edinburgh on Friday 26 May and at the Glasgow Royal Concert Hall on Saturday 27 May.