Media release: Feast of fiddles in Edinburgh next month 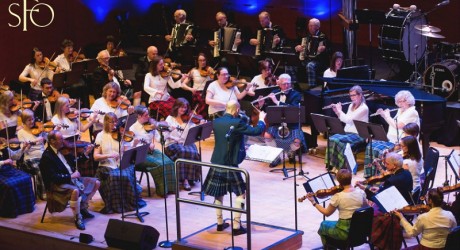 INDULGE in a feast of Scottish culture with a ‘summer fling’ next month from arguably the finest fiddle orchestra in the land.

The Scottish Fiddle Orchestra (SFO) promises an unforgettable experience as around 100 performers – including fiddlers, singers, dancers and pipers – take to the Usher Hall stage on Saturday 3 June.

You’ll have a magical evening of Scottish music ranging from lively and rhythmic toe-tapping jigs and reels to tone poems, well-known songs and poignant slow airs. The concert will be compered by Gary Innes with conductor, Blair Parham, while Dennis Haggerty and Colette Ruddy are the featured singers.

The concert is an ideal event for all ages and any group outing. The orchestra has received standing ovations in countries across the globe such as China, Canada, Australia and New Zealand and will get you clapping and singing along too.

Comments from previous audience members include: “Never thought you could top last year, I was wrong,” (Perth 2016); “A memorable highlight of my first visit to Scotland,” (Edinburgh 2016); and “Outstanding, one word says it all,” (Edinburgh 2016).

If you can’t make the June concert, the Scottish Fiddle Orchestra will also be in action at the Royal Concert Hall in Glasgow, 2 September; The Waterfront Hall in Belfast, 7 October; and back in the Usher Hall, Edinburgh for their Hogmanay event on 30 December.

Further information and photos are available from Susan and Catriona email: edinburgh@sfo.org.uk

The Scottish Fiddle Orchestra is one of Scotland’s foremost traditional music organisations. The orchestra was formed in 1980, deriving its origins from Fiddlers’ Rallies which were – and are – held throughout the country. After one of these rallies, a group of enthusiasts met to consider the formation of an orchestra which would draw its members from a’ the airts and would form a cohesive, vigorously rehearsed group of musicians.

The aim was to have a group of approximately 150 keen and interested musicians who would play together consistently, provide a series of concerts in the main Scottish cities and work together to create the finest possible standard of orchestral fiddle playing without detracting from the strong traditional strains of our music.

The inaugural concert of the Scottish Fiddle Orchestra was on 20th March 1980 in the Music Hall, Aberdeen. Since that time, the orchestra has settled into a sequence of six or seven major concerts each year. A small number of other ‘special’ concerts are also undertaken each year and the orchestra has also toured to Ireland, Canada, China, Australia, New Zealand, Orkney and Shetland.

The members were delighted when, in December 1993, Princess Anne, The Princess Royal, agreed to be the orchestra’s patron.

All of their concerts are given in aid of one or more charities; over the years these charities have benefited by a sum in excess of one million pounds.

The Scottish Fiddle Orchestra is a registered Scottish Charity SC010753 and Company Limited by Guarantee SC310900.