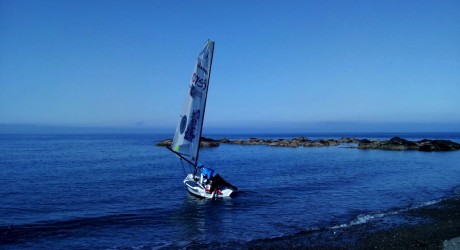 SINCE leaving the Isle of Man, our intrepid sailor, Ken Fowler (51), finally crossed into Scottish waters last week, in his tiny RS Aero – as he continues his ‘Race to Scotland’ challenge in aid of Cancer Research and the Oakhaven Hospice.

The gruelling 12-hour crossing from Peel to Portpatrick pushed him to the very limit as he found himself dealing with squall after squall, and an increasing swell finally culminating in a breaking wave washing him clean off his dinghy, leaving him clinging to the tether for dear life.

A very emotional, exhausted Ken finally landed late in the evening as he navigated his way in through the tricky harbour entrance at Portpatrick.

Having already lost several days of sailing due to bad weather, our sailor, now running short on time left with which to achieve his goal, headed on to Campbeltown early the next morning, keen to get stuck into the last, most demanding section of his epic sail along the west coast and on up to John O’Groats.

With the best will in the world, there is nothing a sailor can do when the wind doesn’t blow, and, once more, after five hours in a thick fog bank, unable to leave the shadow of Ailsa Craig, Campbeltown was getting no closer.

Cloaked in fog, Ken had two near misses with Irish fishing vessels, who were somewhat surprised to find a small sailing dinghy in their path, as he patiently paddled waiting for the wind to fill in, but no wind was coming.

Lady luck was, however, smiling on our sailor, RNLI Campbeltown out on manoeuvres just happened upon our beleaguered Ken that evening and his journey finally ended with a little towing assistance back to shore.

The next day delivered more of the same, ideal for sightseeing the breathtaking scenery of this part of the coastine, not so good for getting from Machrihanish beach to Point Sands.

Optimism carried Ken a good hour into the journey, flying along to his destination before it all came unstuck once more, finding himself sharing water space with a seal for a good few hours as he half-paddled, half-sailed through the lines of barrel jellyfish and onto Point Sands.

From this point on, Scotland abandoned her foray into Mediterranean weather patterns and returned to her wlld roots, ready to chew up our sailor and spit him out again.

Leaving the frustration of the last few days on the beach, Ken pointed the dinghy at Crinan and set off.

Within minutes, the calm waters had turned white and the winds angry, with each loch entrance passed came more wild waters and dangerous conditions all the while in the back of Ken’s mind was the looming terror of the Corryvreckan whirlpool waiting to eat him alive.

So shocked were the vessels that crossed his path, that most passing yachts did a double take and even a local ferry deviated from her course to check out if they were really seeing a tiny boat take on these mighty waters.

With the roar of the maelstrom ahead booming like some kind of terrifying background music to his already demanding sail, Ken hugged the coastline for reassurance wherein he found himself dodging semi submerged boulders exposed by the spring tides.

Crinan called and team Race to Scotland met to touch base and radio check before the final push past the ferocious whirlpool and on to Craobh Cove.

Calculations proved Ken needed to maintain a speed of four knots upwind to get through the chop and the tide to make his destination and the decision was taken to run the gauntlet.

Building up a good head of speed, Ken clocked eight knots upwind before sailing into what he described as “eerie, weird waves with increasing wind speeds getting faster and faster until it felt like the kiss of death was on you, clinging on to the tiller until I lost circulation in my hands, until, suddenly, I was spat out of the other side and all was calm again”.

First to witness this was a passing yacht agog as they struggled to believe that this small vessel has just emerged from that direction.

Sailing to Craobh Cove, that evening Scotland showed her kinder side and Ken arrived at the marina in conditions he described as “so beautiful, it was to die for” as he sailed towards the Craobh marina looking back at the waters that had just tried to eat him alive, leaving him to soak up the ‘heavenly scenery’ for the last two miles, making is back with two minutes to spare for dinner.

As this release goes out, Ken is battling his way up and along to Oban and Tobermory in the rain.

He is still on the lookout for the white tailed eagles and the minky whales but is in “absolute total awe of the breathtaking beauty of Scotland”.

With each beach launch and landing, the local community have been outstanding in their welcome and their generosity and online donations for Cancer Research and Oakhaven Hospice have now topped the £21,000 mark and he is ‘over the moon’ to have found so much support out there.

His time at sea is running out now, he has just over a week now to make it John O’Groats before he has to return to work and the challenge is over.

Ken is doing everything that is humanly possible to make this endeavour work, his tenacity and courage are second to none; now he just needs the ‘weather gods’ to smile on him.

MEDIA RELEASE issued by Gordon Ritchie Management / Sail Scotland. You too can share your stories (aka press or media releases), on this site. Email here for more information.