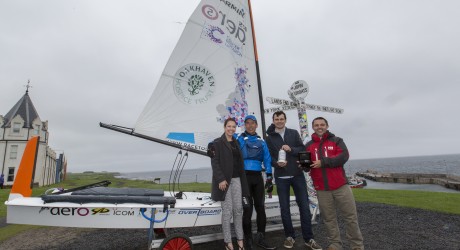 LENGTH of Britain sailor, Ken Fowler, was welcomed at John O’Groats Harbour this morning at the end of his month-long charity sail to the north of Scotland.

Over the past month, Ken has undertaken the ‘Length of Britain Challenge’ – sailing single-handed from Lands’ End to John O’Groats in a dinghy smaller than two bathtubs; to raise over £25,000 for Cancer Research and Oakhaven Hospice.

The clock started on Ken’s challenge back on 7th May, when official timing partner, Kennett timepieces, started his challenge on the southern tip of England. Since then, Ken has had an incredible journey from south to north along the west coast of the UK.

Along the way he has taken on the third largest whirlpool in the world at Corryvreckan, shared hours with seal and dolphins flanking the boat, been showered in sunshine and battered by wind and rain.

Rounding Cape Wrath at the north-western corner of Scotland, over the weekend, he prepared for the final push on what he described as “a roller coaster journey”.

At the finish, a tired and emotional Ken was presented with a stunning Kennett Challenger Chronograph watch and a bottle of award-winning craft gin, Rock Rose, from the Dunnet Bay Distillery, at the most northerly point on the UK mainland.

Arriving at a wet and windy John O’Groats, Ken Fowler said: “I walk away from this adventure with happy memories of amazing people and stunning places.

“A month well lived, for which I am eternally grateful.”

Daniel Steel, CEO of Sail Scotland who developed the Length of Britain Challenge, said: “Ken has shown relentless energy, taking on the weather and tidal conditions to reach the north coast of Scotland over the past month.

“And he has been rewarded with memories that I’m sure will last a lifetime… from wildlife and remote islands to white sandy beaches and towering cliffs, he has shown that the Length of Britain Challenge can be taken on in any vessel if you have a true passion for adventure.”

Martin Murray, founder, Rock Rose Gin, said: “We are delighted to cheer Ken into Caithness. His voyage has been a fantastic achievement for two great charities. We’ll be giving him a thoroughly deserved gin!”

Gail Ross, MSP for Caithness, Sutherland and Ross, added: “To undertake this journey in any type of boat is no mean feat but to do it in a dinghy that weighs as little as an average sized dog is quite incredible!

“Ken Fowler has done an amazing job, experiencing some of the worst that the sea has to offer including whirlpools and ferocious tides. He also had some amazing encounters with dolphins and witnessed some incredible scenery.

“To see him at the end of his journey, safe and well and in great spirits in John O’Groats is great. Ken has also done a fantastic job in raising tens of thousands of pounds for cancer research and care during his time at sea. I wish him well in any future venture he undertakes.”

MEDIA RELEASE issued by Sail Scotland / Gordon Ritchie Management. You too can share your stories (aka press or media releases), on this site. Email here for more information.