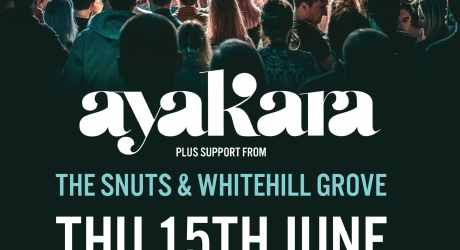 YOUNG Carers Rock! Is a 14-plus benefit gig to celebrate young carers in the city and draw attention to the challenges they face.

Edinburgh bands – Ayakara and Whitehill Grove with The Snuts from West Lothian – head the line-up at the Mash House, 37 Guthrie St on Thursday 15 June, from 7pm until 10pm.

Taking place during National Carers Week (12 – 18 June), this is believed to be Edinburgh’s first benefit gig in aid of young carers – children and young adults with major caring responsibilities for a parent, relative or sibling with a disability, long-term condition or affected by addiction.

Rock fans and especially young carers and friends will benefit from a musical treat by some of Scotland’s most exciting new bands. All profits go to the Edinburgh Young Carers Forum.

Kyle Harris is 14 years-old, goes to Liberton High School and cares for his mum, who is blind. He also helps take care of his two younger sisters.

Kyle says: “When I was growing up, I did not know Edinburgh Young Carers until I was eight years-old. Raising awareness and helping young carers get the support early is a great thing!”

Felix Christie, Ayakara lead guitarist, pays tribute to Edinburgh’s young carers, saying: “Years ago, all of us in Ayakara went to Trinity Academy. We formed the band in our spare time. Young carers don’t have much spare time. They start and end the day looking after a parent or relative at home. They often miss out on just about everything we take for granted.”

Callum Jones plays bass guitar and says: “We dedicate this gig to all young carers in this city. We hope many of you can take a night off and come along for a great rock ‘n’ roll show!”

The gig is supported by local carer organisations EYCP (Edinburgh Young Carers Project) and VOCAL (Voice of Carers Across Lothian) who support over 7,000 carers in the city.

Entry for this 14+ event is £3 for young carers, £6 for others and £10 for all who want to give an extra donation the Edinburgh Young Carers Forum.

MEDIA RELEASE issued by VOCAL. You too can share your stories (aka press or media releases), on this site. Email here for more information.