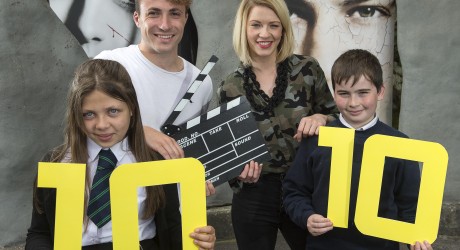 THE national Gaelic film competition, FilmG is celebrating its tenth year, with some famous faces in the world of Gaelic broadcasting launching this year’s competition in Wester Ross.

Fiona MacKenzie, the face of BBC ALBA, and journalist and footballer, Calum Ferguson, were on hand with pupils from Gairloch High School yesterday (Thursday 22 June) to launch the tenth FilmG competition.

Over this time, a bank of more than 650 Gaelic short films has been created online and the competition has become a springboard for young people keen to carve out a career in Gaelic media.

These youngsters include two Gaelic children’s TV presenters, Megan MacLennan and Kerry Anne MacLeod, who were both shortlisted for their wonderful performances at the first ever FilmG awards ceremony and who now appear regularly on BBC ALBA.

As well as individual successes, schools across the country regularly participate in the competition and the benefits have been wide-reaching.

Gairloch High school became the focal point of this year’s launch due its success the previous year, with pupils taking home a hoard of prizes, including ‘Best Mobile Short’, ‘Best Script’ and ‘Best Animation’.

“Over the last few years, we’ve learned a lot about film-making and it was great that all that effort paid off in FilmG 2017. We’re very much looking forward to getting involved again this year; in fact, some of the pupils are already developing their ideas and beginning work on their scripts!”

As ever, the FilmG competition kicked off by announcing the competition theme and unveiling the three images/posters that illustrate the theme and give entrants a starting point for their ideas.

This year, the chosen theme is ‘Fìrinn’(truth) and Fiona MacKenzie and Calum Ferguson unveiled the three dramatic images, one of which was initially designed by Plockton High school pupil, Lucy Small, as part of the FilmG tenth anniversary poster competition.

Having been at the helm of the project since its inception, project manager, Floraidh Forrest, is delighted the competition has reached this important milestone.

Said Floraidh: “FilmG has been such an exciting project for me and our talented team at Cànan Graphic Studio to work on.

“Over the course of the last ten years, we have seen dramatic developments in the way video content is created and distributed and I’m pleased that within the Gaelic media sector, FilmG has been at the forefront of these developments.

“FilmG continues to engage with young Gaelic speakers and encourages them to make their voices and unique stories heard in what is a very crowded cyberspace environment. Roll on the next ten years!”

As well as the main competition, this year sees the introduction of some ‘flash’ mini-competitions to help entrants prepare for the competition and generate a buzz throughout the year.

These include the ‘Summer Stop Motion’ competition, which is open children of all ages to make a one minute animation on any subject.

The winner of last year’s ‘Youth Animation Award’, Gairloch High School pupil, Ruairidh Alexander, was on hand to encourage is peers to get involved.

He said: “I started making animations about a year or two ago, and when I heard that there was a FilmG competition, I was very excited. My whole experience working with FilmG has been great, and it’s given me the confidence to keep going. This is my first animation using voice over, but I don’t think it will be my last!”

The ‘Summer Stop Motion’ competition is open until the 18 August and other flash competition will be announced throughout the year.

The main competition is open until the 8 December 2017 and entrants are asked to make shorts up to five minutes in length in Gaelic.

All films from previous years are available to watch online at www.filmg.co.uk.

If you’d like to make a film and want to know more about the competition, please contact the team at fios@filmg.co.uk.