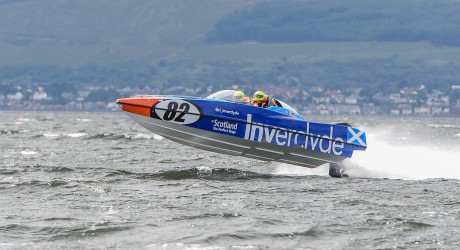 AN “undoubted success” is how Inverclyde Council leader, Stephen McCabe, hailed the return of P1 powerboat and jet ski racing to Greenock at the end of June.

“The P1 Scottish Grand Prix of the Sea event has it all, both on the water and on shore,” he said after presenting trophies on the race podium.

More than 30,000 spectators lined the waterfront over the two days to enjoy the high-speed action and to visit the trade stands and food stalls that featured in the Esplanade Showcase.

Reflecting of the second year of the event, P1 managing director, Robert Wicks, commented: “Our partnership with co-hosts, Inverclyde Council and Riverside Inverclyde, is immensely rewarding and the huge crowd of local residents and visitors were treated to some spectacular racing on the choppy and challenging waters of the Clyde.

“The impact of our two Grand Prix events has cemented Inverclyde’s status as the marine leisure capital of Scotland.

“We believe the mix of top class sport and family entertainment plays an important role in supporting Inverclyde’s regeneration and reimaging programme through attracting visitors, raising the profile of the region and boosting the local economy.”

Local powerboat favourite, Spirit of Inverclyde – with father and daughter pairing, Dave and Ashleigh Finlayson, from Musselburgh, in the cockpit – recorded another set of consistent race results at their second ever P1 Grand Prix of the Sea weekend, to finish fourth.

“Our home event was a superb venue for racing and it was great to see the crowds along the Esplanade cheering us on,” said navigator, Ashleigh.

“The fierce wind produced testing conditions but we enjoyed flying the flag for Inverclyde and Scotland.”

Added Wicks: “Last year’s P1 event, which attracted a similar number of spectators, delivered an overall event impact of £2.3m, and we are confident that last month’s Grand Prix will have made a significant contribution to the local economy, with extensive international TV coverage – including Sky Sports in the UK – enhancing the profile of Inverclyde.”