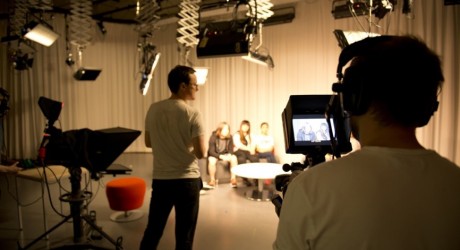 UNIVERSITY of the West of Scotland (UWS) has launched a new summer school aimed at equipping young people with the skills to pursue a career in Scotland’s growing broadcast sector.

‘A Taste of TV’, launched by the University’s Creative Media Academy, is open to anyone over the age of 14, and allows participants to develop their creative and production skills using the studios and newsroom at UWS.

The course will run from the 31 July to 4 August at the university’s £81 million Ayr Campus, in which STV2 is now broadcast from.

With recent news of an additional £30 million investment from the BBC in its new Scottish channel, launching in 2018 – and with a plan to recruit 80 new journalists – there has never been a better time for people in Scotland to connect to the screen industries.

Students will work as a member of a studio production team to develop and record programme content for live broadcast TV. They will also be given the chance to create a short film, as well as practicing their news reporting techniques.

Professor Nick Higgins, director of the Creative Media Academy, said: “As Scotland’s television and film industries continue to expand, and with new programming dedicated to Scottish TV, it is crucial we develop skills to continue to feed the sector well into the future.

“The course allows participants to develop a whole range of skills, giving people in the West of Scotland and beyond, a strong platform from which to pursue a career in the media.

“A Taste of TV is perfect for both those looking for a job behind and in front of the camera, as well as those looking to have fun and get creative.”

UWS’ Creative Media Academy has strong industry and public sector links, and focuses on talent development from film and TV to performance and digital art.

Accommodation in the university’s residence is also available for participants travelling to Ayr for the course.

To book a place on the Summer School, go to bit.ly/atasteoftv.