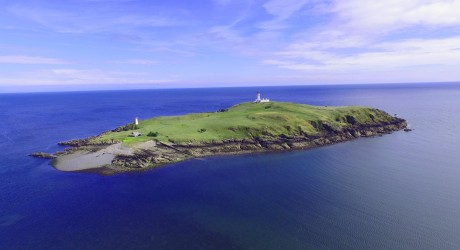 YOU could become one step closer to owning your very own island hideaway as Little Ross Island, off the coast of south-west Scotland, has been put up for sale.

The 29-acre island is currently owned by St Mary’s Isle Estate and has come on the open market through one of Scotland’s leading independent property consultants, Galbraith.

Little Ross has much history being home to a working lighthouse tower which was designed and built by Alan Stevenson and first lit on 1 January 1843.

The light, along with Buchan Ness and the Rhinns of Islay, was hailed by William Thomson (later Lord Kelvin) as being “undoubtedly the three best revolving lights in the world”.

Enjoying a fabulous location just off Meikle Ross headland on the mainland, with the small rocks of Sugarloaf and Fox Craig your only neighbours, Little Ross Island presents a pleasantly limiting and peaceful lifestyle alternative or an ideal holiday retreat.

This once-in-a-lifetime opportunity includes the original six-bedroom lighthouse keeper’s cottage – last updated in the mid-1980s, the property and its services are in need of refurbishment. The three B-listed ruinous barns, also included in the sale, each offer fantastic development potential.

The operational lighthouse tower and separate sighting tower are not included in the sale. They are still owned and managed by the Commissioner for Northern Lighthouses however, since automation in 1961 the lighthouse tower no longer requires full-time staff with few discreet site visits made by the local harbour master throughout the year.

The island is only accessible by private boat or helicopter. There are sheltered moorings on the north and more modern slipway on the north-west of the island, both accessible at high tide, with a substantial marina in Kirkcudbright for longer-term mooring.

David Corrie, senior associate at Galbraith, Castle Douglas, said: “Back in the 1900’s, the island was home to the head lighthouse keeper, underkeeper and their families, extending to 16 people, with a small dairy and piggery to provide subsistence for this family community.

“With a bit of TLC, the properties on the island could be turned into something truly stunning, with Little Ross Island once again being the perfect island retreat for future generations to enjoy.

“Private islands rarely come up for sale at an affordable price and particularly one with a habitable house and additional properties. Given the exciting prospect Little Ross Island presents, we expect a lot of interest from all over the UK as well as abroad.”

The south-west of Scotland is well known for its mild climate, attractive unspoilt countryside and abundance and diversity of its recreational and sporting pursuits, such as shooting, stalking, as well as trout and salmon fishing on the region’s numerous rivers and lochs.

The Galloway Forest Park, well known for its beauty and tranquillity, is also recognised as Britain’s first Dark Sky Park, and provides astronomers phenomenal views of the stars with a newly opened observatory.

Transport links to the area are very good, with a railway station in both Dumfries and Lockerbie.

The M74 motorway is about 57 miles distant, allowing easy access north and south.

Regular flights to parts of the UK and Ireland as well as continental Europe depart from Prestwick Airport, which is 70 miles to the north.

Both Glasgow and Edinburgh, with their international airports are around 100 miles distant.

A ferry service to Northern Ireland operates with Stenna Link from Cairnryan 53 miles to the west, close to Stranraer.

The firm provides the full range of property consulting services across the residential, commercial, rural and renewable energy sectors throughout Scotland and northern England. Galbraith is one of Scotland’s largest and leading rural consultancies, managing and providing advice on farm, forestry, land and estate interests on over three million acres.

To find out more about Galbraith visit www.galbraithgroup.com or follow: