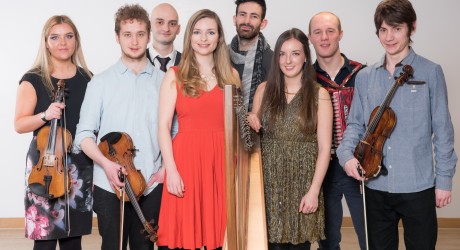 THERE are just two more chances to catch eight of Scotland’s finest young folk musicians who have been touring their home towns.

The finalists and winner of the BBC Radio Scotland Young Traditional Musician of the Year Competition (2016) started the tour in Helensburgh on Tuesday 30 May before visiting The Isle of Lismore, Edinburgh and Glasgow before visits to Fort William and Orkney next week.

The group have recorded an album together thanks to the TMSA (Traditional Music & Song Association of Scotland) which was launched at their Glasgow concert last week.

This TMSA Young Trad Tour also forms the basis of the group helping to showcase the best of Scottish traditional music at the renowned ‘Festival Interceltique de Lorient’ in August which takes place in Brittany, France. Catch them first on their tour around Scotland!

Winner, Mohsen Amini, was raring to go ahead of the tour, saying: “This is going to be a very busy but exciting summer.

“Winning the Young Traditional Musician of the Year Award last year was awesome but now the fun really starts as I get to visit some amazing places, including my home town of Glasgow, with a great bunch of musicians.

TMSA convener, Fiona Campbell, said: “The annual TMSA Young Trad Tour and album is always a great opportunity to showcase the rising starts of Scotland’s traditional music scene but this year we also get the bonus of featuring at Lorient.

“Lorient is the largest Celtic festival in the world so, to have the opportunity to play at the ‘Scotland Pavilion’, is really exciting for the young musicians and I have no doubt the group will act as fantastic ambassadors for both the TMSA and Scotland.”

Essential to the success of the project is musical director, Anna Massie, one of Scotland’s foremost guitarists, well known for her work with the likes of Blazin’ Fiddles.

She said: “Taking over from Corrina Hewat as musical director for the TMSA leaves some very big shoes to be filled but I am very excited about helping this crop of finalists not only develop their individual skills but to sound really special as a group.”

Sarah Mcadam, creative learning officer at Creative Scotland, said: “The TMSA Young Trad Tour is a great opportunity to celebrate the exciting young talent emerging from Scotland’s traditional music sector and as a launchpad for young musicians at the beginning of their careers.

“The depth of talent within the line-up of the 2016 Finalist tour is a testament to this, with 2016 Young Traditional Musician of the Year winner, Mohsen Amini, having since been nominated for ‘Musician of the Year’ at the 2017 BBC Radio 2 Folk Awards. We’re looking forward to following the tour and the paths that the finalists take in their future careers.”

Mohsen Amini – concertina (Glasgow) – 2016 winner Mohsen Amini from Glasgow, Scotland, is a fast-growing name in the traditional world. Boasted by The Herald as a “Virtuoso”, he’s creating quite a reputation as a concertina player in Scotland.

He co-founded multi-award winning trio, Talisk, who after only two months of formation won a Danny Kyle award at Celtic Connections and shortly after won a BBC Radio 2 Folk Award.

Their debut album, Abyss, was shortlisted at the 2016 MG Alba Trad Awards as ‘Album of the Year‘, the same awards where they had previously been nominated for ‘Up and Coming Artists the Year’.

Their continued success saw them receive a nomination for the ‘Horizon award’ at the 2017 BBC Radio 2 Folk Awards.

Mohsen also founded acclaimed supergroup, Ímar, at the start of 2016.

They, in the space of one year, managed to go viral and stack an impressive 11,000 likes on Facebook, an unheard-of feat in the traditional music world, which provided a great platform to launch their debut album, Afterlight, in 2017 which managed to achieve no less that a five-star review on its launch gig at Celtic Connections.

She has also featured on numerous radio programmes and on television, and has toured extensively. Claire performs as a solo artist, with The Claire Hastings Band and in Top Floor Taivers, who released their debut album, A Delicate Game, this year.

She released her debut solo album; Between River and Railway in 2016, which was described as “one of the best Scottish releases this year (2016) in any musical genre”, by the head of music at Creative Scotland. www.clairehastings.com

Hannah MacRae – fiddle (Lochaber) As a west coast fiddle player, traditional music has been in Hannah’s family for generations. Hannah has taken time to establish her own personal style and varies her repertoire by playing with accomplished musicians from different places and backgrounds. Hannah is a strong believer in keeping up tradition – in particular, the culture of traditional music and Gaelic – and has been teaching fiddle for the past year. She is currently studying for a BMus in Traditional Music at the Royal Conservatoire of Scotland.

She began playing the clarsach at 11 and soon joined school fiddle group Hadhirgaan, led by Douglas Montgomery. Jessica graduated with a degree in Scottish music from the Royal Conservatoire of Scotland in 2012 where she studied with Wendy Stewart and Hannah Phillips.

Jessica has released an EP, Mira with fellow harpist Sarah MacNeil featuring original compositions and contemporary arrangements for clarsach and electro-harp. Jessica currently holds a teaching post at both the Glasgow Academy and the Junior Royal Conservatoire of Scotland. Jessica loves writing tunes and in 2015 was awarded the Clarsach Society Young Composer Award with her piece Shorelines.

In September 2016, Ryan began recording his debut album with Jesse Lewis, a three-time Grammy winning producer and the album will be released in 2017.

Murray Willis – accordion (Lismore) Murray comes from the Isle of Lismore in Loch Linnhe, Argyll. He speaks Gaelic, has a qualification in blacksmithing and works with a welding company. Murray studied music at Benbecula College in Uist under Anna-Wendy Stevenson which he says was an eye-opener and his lessons and time spent with the brilliant tutors there greatly influenced and encouraged him. Murray is also learning the piano, alto saxophone and French.

After moving to Uist aged 16 to pursue his studies in traditional music, Robbie received tuition from renowned tutor Anna-Wendy Stevenson. There, he joined the band ‘Room 5’ with whom he performed at the Royal Albert Hall. Recently, he has also toured with The Paul McKenna Band and Malinky.

Jean Damei – guitar Jean grew up in the south-east of France, near the city of Grenoble. He started learning Irish traditional music after meeting a group of Irish musicians teaching and touring in the Alps.

After discovering his passion for this music, Jean left Ardèche, his childhood home, to study flute and guitar at the Irish World Academy of the University of Limerick in Ireland. He spent six years there, completing the Irish Music and Dance BA and Irish Traditional Music Performance MA.

Jean is now living in Glasgow, where he can be seen performing with the bands ‘Fourth Moon’ and ‘Event Horizon’ as well as teaching at the Online Academy of Irish Music.

Audiences will be treated to a mix of new material written and composed by these outstanding young musicians, as well as innovative arrangements of traditional tunes.

The album was recorded and mastered at the renowned Castlesound Studios, Pencaitland, East Lothian.

Attached photo is by Sean Purser.