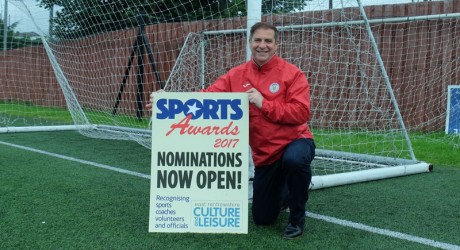 FORMER football star, coach and manager, Tony Fitzpatrick is urging people not to miss out on the chance to put forward an unsung hero of sport for a top award.

Tony, who was made captain of St Mirren by their then-manager, Alex Ferguson, and then went on to manage the club twice, is backing East Renfrewshire Culture and Leisure’s Sports Awards 2017.

The aim of the awards is to recognise the hard work and dedication of local sports coaches, volunteers and officials and the closing date for nominations is Thursday, August 30.

Tony says the work of sports coaches, volunteers and officials are vital to allow youngsters and adults to take part in organised sport. And he revealed it was volunteer coaches who played a big role in him becoming a professional footballer.

“Ironically, my dad, James, was my first football coach when he started a youth team in Possil, called Dundas Vale.

“After that, I was signed by the famous Possil YM and it was a wonderful man called Bobby Dinnie who ran that team. Along with other volunteers, Bobby coached the youngsters, organised the games, bought the strips and if they were good enough, looked after the players when professional teams came calling looking for their signature.”

Tony added: “Guys like Bobby, the volunteers, referees and others who help keep grassroots sport going deserve a great deal of recognition.

“The Sports Awards are a great way of giving them that recognition and if anyone reckons they know of someone who deserves an award, they should get nominating before the final whistle goes on Thursday.”

There are various categories in the ERCL Coaching, Officiating and Volunteering Awards 2017, so log on to www.ercultureandleisure/awards2017 to make a nomination.

MEDIA RELEASE issued by Macdonald Media. You too can share your stories (aka press or media releases), on this site. Email here for more information.