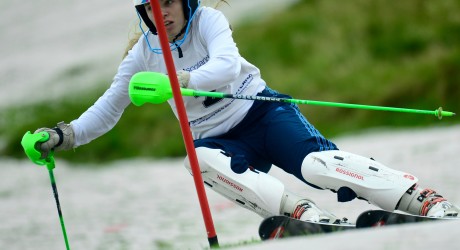 NICOLE Ritchie, from Glasgow, has won the Scottish Slalom Championships for the seventh consecutive year – at Hillend ski slope in Edinburgh.

The 133-competitor field was slightly smaller in numbers due to a clash with the all-England championships but, with the British championships taking place on the 23rd September, Scottish athletes will at least have had the chance to race at a national race.

Adds a spokesperson: “And the competitors will have also had the testing circuit at Hillend ‘under their belt’. Hillend is the longest, toughest and steepest artificial slope in Europe and, under race conditions, provides a real challenge for competitors.”

After the first run, Ritchie was 0.72  second in front of her closest rival, Eilidh Ryan. Claire Winthrop was lying in third place, 2.79 seconds off Ritchie.

Ryan knew she had to push her racing to the limit on the second run and did so – closing the gap – but Ritchie had enough of a lead after her first run such that she knew she could ski on the challenging course set by Mark Vinter – GB coach of the year – without falling and potentially causing injury in advance of the snow season.

Ritchie has won these championships for seven consecutive years and has won every listed race on the Scottish circuit at Hillend.

Ritchie is one of the few GB athletes who competes in the UK on the artificial slope circuit and – as well as wining at Hillend for the last seven years – has taken the Scottish indoor slope championships for the last five years.

Nicole will restart her training in France with top French club, Orsatus, that will manage her European FIS racing entries where she will aim to improve her world ranking.

Alan McLeish MD at her sponsors, QTS, said “Nicole is a superb athlete and we had saw her race at the GB championships in Tignes in February where she won bronze.

“She is being supported through our comprehensive young athlete programme. We have a tough talent selection programme and Nicole is part of that. She is ranked as a top GB athlete on both outdoor artificial and indoor artificial, plus on the national and international FIS Alpine Ski racing circuit.”

Nicole Ritchie age 22, from Glasgow is a full-time alpine athlete – supported by the QTS group, under their youth athlete programme. She is also supported by ski manufacturer, Rossignol. She trains with Orsatus racing in Meribel France and Glasgow Ski racing. She will compete on the International FIS race circuit in 2017/18.