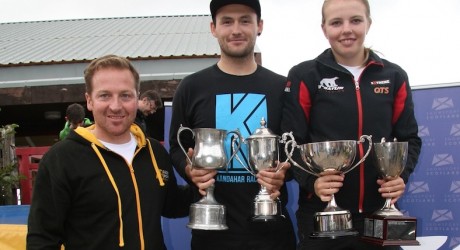 THE British championships were held at Hillend Ski Slope (Midlothian Ski Centre) this weekend, with the seeded slalom on Saturday and the non-seeded giant slalom on Sunday.

The top-seeded racers (in order, Nicole Shering, Georgia Hallett and Jenny Davies (from Snowsport England)) were all favourites to take the podium, but Nicole Ritchie and Eilidh Ryan, both from Scotland, had other ideas.

Ritchie was determined to take victory. Ryan who trains at Hillend pushed Ritchie close but could not make up the difference on the second run.

Ritchie said: “I was pushed hard by Eilidh and had to fight on the second run.

“On paper, neither Eilidh nor myself should have been on the podium and, in fact, I knew I had to put it down on the first run but was confident that I could make it up on the second.

“It is a great feeling to now hold the Scottish, held earlier this year, and the British title and now all I have to do is move on to replicating that on snow this season.”

The results at The British Championship 2017 were:

Nicole Ritchie, age 22, from Glasgow is a full-time alpine athlete – supported by the QTS group, under their youth athlete programme.

She is also supported by ski manufacturer, Rossignol.

She trains with Orsatus racing in Meribel France and Glasgow Ski racing. She will compete on the International FIS race circuit in 2017/18.