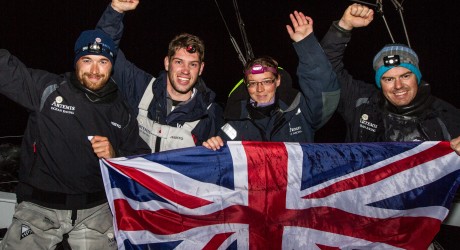 Daniel Steel, chief executive of Sail Scotland, which developed and organises the challenge, said: “We are delighted to crown the Vendee2020Vision team as the new Length of Britain record holders.

“They have shown incredible skill and endurance, taking on the weather and tidal conditions to not only reach the north coast of Scotland in a world record time, but to smash it by over 21 hours.

“It will be fascinating to see this talented young crew continue to develop, and I hope that taking on our iconic challenge to Scotland will be a memory that lives with them as they make a name for themselves on the world stage.”

It has been a trip that has seen every kind of condition you could expect, from over 40 knots and a confused sea state to battling against the clock with no wind at the finish.

“To be honest, it was a relief to get over the line, the last few nights have been pretty tough particularly due to the issues with the wind instruments.

“I have sailed around the UK three times but this passage has been the hardest, to date.

“To secure the record is fantastic, but this is also about giving these young sailors experience and building towards our ultimate goal to have a young British sailor on the start line for the Vendee Globe in 2020.

“They have all gained a lot of great experience and learnings to take away from this trip, from how they manage technical issues on-board, to sailing in every extreme of weather.

“They all did an amazing job and there are a lot of positives to take away and build on for the future.”

The team faced a technical issue on day two after the mainsail car bungy broke and the vertical wand which supplies the instruments with wind data was damaged.

The crew pulled into open water in Belfast Lock so they could continue sailing and complete repairs without having to stop the record attempt.

The wind instruments proved hard to repair at sea and the crew had to continue with limited and at times no wind data as they made the final approach to the north west tip of Scotland.

Sixty miles from the finish off John O’Groats the wind dropped to under three knots as they faced an agonising final sail to the finish line. Crossing the line just after six in the morning, the team slashed 21 hours and 14 minutes off the existing record held by British Sailor Phil Sharp.

Added said Simon Hansford, CEO at UKCloud, Vendee2020Vision partner: “UKCloud is immensely proud of the team and their success in breaking the record.

“We supported this amazing challenge because it celebrates British talent and requires the very best in human endeavour; leadership and ingenuity and the team have demonstrated all three characteristics in abundance.

“They have produced a great result which raises the bar for future challengers. Well done: Mikey, Lizzie, Andrew and Jack and the entire support cast back at Whitecap.”

Said Caroline O’Donnell, Artemis Investment Management LLP, Vendee2020Vision partner: “We’re delighted that the Vendee2020Vision team have beaten the Length of Britain record. It’s quite something to have taken over 21 hours of the record. Huge congratulations to the team.”

Quotes from the boat:

“We couldn’t be happier, it has been a testing sail, with ups and downs. From lots of wind to the flip side of no wind at the finish. We pushed both the boat and ourselves to the limit, but we’re super happy to have broken the record.”

“It is absolutely fantastic to cross the finish line, this was tricky tactical sailing, but really great fun and great to finish. It is fantastic boost in our skill levels and improve our tactical and navigation skills. This has been a huge benefit to me, to pick up new things from the other crew members, and this is a real stepping stone from the smaller boats I have been racing to step up to a boat this size.”

“Really pleased to have broken the record, and really interesting trip with a real mix of weather and conditions. Record breaking sailing is really interesting there are no other boats to race so it takes away the whole fleet racing element, just the clock to race.  You are really focused on the weather and tactics, you can really push it and work on things and enjoy being part of the team”.

View the images and videos from the trip here:

MEDIA RELEASE issued by Sail Scotland. You too can share your stories (aka press or media releases), on this site. Email here for more information.